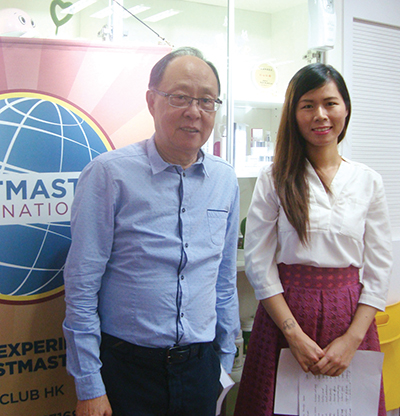 FROM LEFT: Frank Lee, Dongxia Su
Frank Lee, an award-winning film producer from Hong Kong, served as an advisor for technology companies before moving on to produce films. In 2009, his documentary Sons of Cuba won 14 international awards. But he was a Toastmaster first.

In 2014, freelance writer Dongxia Su was invited by a friend to attend a meeting of the New Experience club. She joined the Shenzhen club, and Frank became her mentor.

Tell us about Frank.

Frank writes lyrics and film scripts and produces films and documentaries. He encourages me to be active as a club officer in Toastmasters and also guides me in my career. For example, I wished to write scripts for China’s TV and film industry. Frank introduced me to a script writing workshop where I learned more about the many ways to tell an interesting story.

He encourages creativity and innovation and teaches us how to effect changes to make a better world. He pursues excellence and selflessly guides those of us in the younger generation. For example, when a former member of our club taught 10 physically handicapped individuals to speak publicly in English, Frank gave him encouragement and support. Whenever I am in a challenging situation, his words guide me as I march forward.


What has he taught you?

Frank says a truly successful person is one who “has left the world better than he found it, whether by an improved poppy, a perfect poem or a rescued soul.” He has helped us to understand that real success is about improving the world.