A Lifetime of Laughter 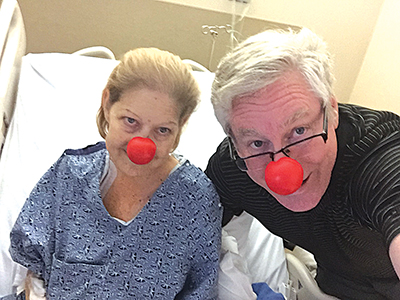 Gilbert and his former wife, Dori (left), pose with red noses at the hospital in June 2016. Gilbert often uses humor to cope with challenging times.
When George Gilbert was 12, his parents put him on a stage to perform in front of 800 people at the Disneyland Hotel in Anaheim, California. The happiest place on earth had suddenly become the scariest.


Fortunately for young Gilbert, show business ran in his blood. His parents, Tulara Lee and George Gilbert Sr., were considered one of the funniest comedy acts of their time. Gilbert grew up in their humor-filled family home in Las Vegas, Nevada, where he would often brush shoulders with famous entertainers at parties his parents threw. It’s a house full of many memories that he still lives in today.

Gilbert, is an 18-year Toastmaster and Accredited Speaker. His career as a stand-up comic began at a young age, and while he went on to perform at comedy clubs and conventions—even pairing up with his mother for a double comedy act—Gilbert ultimately became a professional speaker with a focus on humor.

Today he delivers entertaining presentations on the importance of humor in business to professional organizations, and he’s a member of two Toastmasters clubs in Las Vegas.

What was life like as a child with famous parents?

Comedian Jack Benny once said that my parents were the funniest act he had ever seen. They performed a physical comedy act all over the world with the great stars of their day, including Frank Sinatra, Bob Hope and Sammy Davis Jr. I had the best childhood, with comedians and entertainers always coming over to the house. There was always laughter and music.

I had been doing professional stand-up comedy since the age of 12, so I joined Toastmasters when I was 36 to help me segue from stand-up to motivational humor.


In 1994, four years before I joined, my former wife had a kidney/pancreas transplant, and after she recovered I wanted to share how we had used humor to get us through those tough times. I had also made a promise to myself that if she got her transplant, I would use my speaking skills to talk about the importance of organ and tissue donation. Joining Toastmasters helped give me the structure and content I needed to make the transition, and I used the Accredited Speaker Program as my blueprint to becoming a professional speaker.

Talk about your career.

I have traveled across the country speaking about the role humor plays in the workplace and the benefits of laughter in life. What keeps me going is making people laugh and inspiring them to overcome tough times. My motto is “Laughter is a wellness program everyone can afford.”


I formed my company, Originally Speaking, in 2003 to further my speaking career by promoting my presentations and now my books. 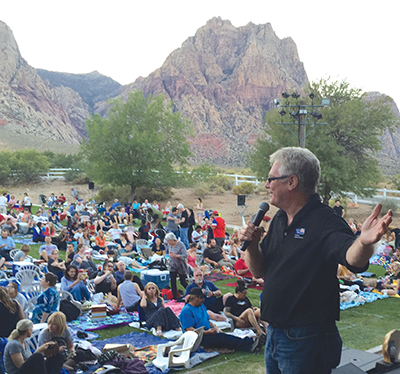 What kind of humor do you use in your presentations?

One example, from my presentation “Take Two Laughs and Call Me in the Morning,” I talk about when my former wife was in the hospital recovering from her transplant. When I walked in the room, I saw her looking at herself in a mirror with a scowl, complaining that she now looked ugly with all the staples down her torso. I said “Are you kidding? You look like a Playboy centerfold. And even they have staples down the front!” Then she laughed, realizing this was just a temporary situation.


What advice do you have for members?

Get up in front of an audience as often as you can. The old comedians backstage would tell me, “Georgie, you need a place to be bad.” You need a safe place, such as Toastmasters, to get up as often as possible to break in your material and work on your timing.