Sunil Robert Vuppula escaped poverty in India through his passion for public speaking. 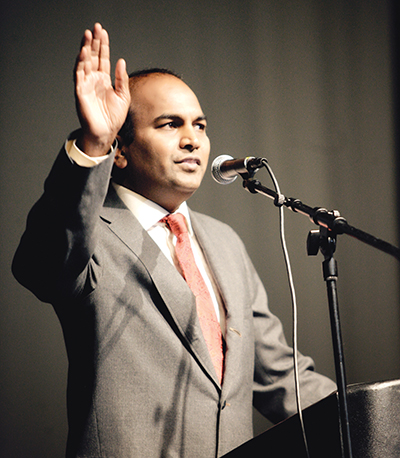 Sunil Robert Vuppula speaks at a South Asian Leadership Summit in East Rutherford, New Jersey, in 2013. Vuppula found his calling in public speaking after overcoming a number of obstacles as a child growing up in India.
For Sunil Robert Vuppula, discovering at a young age that he had a natural talent for public speaking was the beginning of a lifelong journey—one that led him out of a downward spiral of poverty, fear and violence and onto a path to becoming the accomplished communications professional he is today.


Vuppula, ACG, ALB, overcame a number of obstacles growing up in Hyderabad, India. While his family lived comfortably during his early childhood, Vuppula says his life “became topsy-turvy” at around age 11 when his father lost his job.

“The next seven to eight years were the most dark and despairing days of my life,” he says. “My family was staring down the barrel of absolute abject poverty. In India, when you lose your job, it’s too bad for you. There are no food stamps, no social security, no aid. You’re just another one of the millions struggling to survive.”

While Vuppula battled feelings of resentment, fear and helplessness about his family’s economic situation, his public speaking skills—he competed in speech contests as a youth—gave him hope for a better future. “Public speaking was something I could clutch onto to stay afloat,” he says. “In this entirely dark cloud of my existence, the only silver lining was my ability to express myself in front of a crowd.”

Now 47 and a U.S. citizen living with his wife and two sons in Edison, New Jersey, Vuppula credits his talent for public speaking with changing his life and inspiring him to pursue a career in communications. He started on this professional path by working as a door-to-door sales representative and as a journalist and radio announcer before moving into marketing and public relations.

Since 2008, Vuppula has served as head of marketing for the Americas and Europe for TCS Financial Solutions, part of the global information technology services, consulting and business solutions firm Tata Consultancy Services (TCS). Vuppula also is an author, leadership coach and motivational speaker who has helped thousands of people through his speeches, leadership programs and mentoring.

“Today I’m on a mission to transform the world with my communication skills,” he says.

Vuppula’s first experiences with public speaking were during youth competitions at church and school. When he went to college at 15, his speaking abilities led to his involvement in student politics, which he says can be violent in India. Vuppula admits he was an angry and defiant young man, and amid the violence he experienced, he resorted to carrying a knife—“to defend myself, to threaten others and to feel secure. My life was riddled with a lot of these violent skirmishes.”


Shortly before his 18th birthday, he reached a turning point in his life when he won a speech contest at a nationwide youth festival. “That was the day that I decided, Hey, I have something going on, and if I neglect my gift of public speaking and continue in my violent and rebellious ways, I could end up bitter and angry for the rest of my life,” he says. “I decided then that if I was going to build a career, it would be in communications, and I kind of intuitively knew that was my calling.”

After studying history, political science and public administration to earn a bachelor’s degree from Dr. B.R. Ambedkar Open University in Hyderabad, Vuppula set his sights on getting the additional higher education he needed to build a successful communications career in India. The obstacle in this case was that from about age 18 he was working to support his three siblings and his parents, making it virtually impossible for him to attend full-time classes.

To earn his master’s degrees in business administration and journalism and communications from Osmania University in Hyderabad, Vuppula had to convince school officials to give him a chance to pass the first semester’s courses even though he couldn’t attend classes regularly. He then spent his days working and his evenings catching up on what he missed, with help from classmates.

Vuppula’s passion fueled him during those long days, helping him succeed in his educational endeavors and in his early career. “I just had this love for speaking, this love for communication,” he says.

Getting to the Next Level

The next major turning point in Vuppula’s life came in 1999 when he helped found the Sunshine Toastmasters club in Bangalore, where he had been working as director of marketing communications for Acer India. Joining Toastmasters, he says, helped him take the next step as a communicator, and he credits the experience with giving him the tools to advance his career.


“Toastmasters teaches you how to use gestures and pauses—pauses for impact, pauses for purpose,” Vuppula says. “When you use these skills in the corporate world, you stand apart and you really shine.”

In 2004, he moved to London while serving as manager of public relations and corporate affairs for the company i-flex Solutions (which is now Oracle Financial Services). In 2005, he moved to the United States, where he worked as director of marketing and communications for Oracle for nearly three years before joining TCS Financial Solutions.

“Public speaking was something I could clutch onto to stay afloat.”

In his current position, Vuppula manages marketing campaigns as well as large events where he serves as emcee, moderates discussions and conducts on-stage interviews. He says his Toastmasters training has given him the confidence to excel in these roles.

Since he first became a Toastmaster in Bangalore, Vuppula has sought out a club in every city where he’s lived. He joined the Jim Friend Toastmasters in Edison in 2008. He’s since served as president of the club and as director of Area 51. He also is a member of ACES, an advanced Toastmasters club in Iselin, New Jersey, and the club’s vice president public relations.

Vuppula’s dedication to Toastmasters has paid off, according to Thomas Somers, DTM, vice president membership for both the Jim Friend Toastmasters and ACES clubs. Since Vuppula joined the Jim Friend club, Somers says, he has become a more confident and articulate speaker. “His pace is also better, and he’s using more vocal variety and more gestures,” Somers adds.


Vuppula’s talent as a leader and communicator has opened many opportunities for him. Aside from his position as head of marketing for the Americas and Europe for TCS Financial Solutions, Vuppula also serves as one of the key faculty members for TCS’ leadership development programs. He teaches leadership courses for senior managers and higher-level staff.

“The way he relays his story and the training material is very compelling,” says Ed Dunn, head of talent development for North America for TCS. “He’s able to intertwine his flight, his journey, into the training, and that makes him a good presenter for leaders.”

Vuppula also speaks to youth groups and writes about his experience turning his life around. His first book, the inspirational semi-autobiography I Will Survive: Comeback Stories of a Corporate Warrior, was published in 2009. He released his second book, Bound to Rise: Radical Ideas for the New Corporate World, in New ­Delhi in 2014 at the Indian Confederation of NGOs’ REX Conclive, which Vuppula says is similar to a TED conference. In fact, Vuppula was one of the speakers. He also was awarded a REX Karmaveer Global Fellowship during the event for his efforts to inspire others.

Vuppula’s success allowed him to continue providing for his family in India. He supported his two younger sisters and his brother while they attended college and began their own careers, as well as his parents until they passed away several years ago. “It gave me tremendous satisfaction to see my siblings settle and my parents gleam with pride,” he says.

Today, both at work and outside the office, Vuppula strives to motivate people to reach their goals. In addition to teaching leadership skills to his colleagues, he speaks at colleges in India and in the United States about topics such as overcoming adversity and finding one’s calling.

Vuppula also mentors students and others who reach out to him for advice. While he enjoys addressing large audiences, he says helping individuals, especially young people, is what matters most.

“If you can make a difference in one person’s life, I think you’ve fulfilled your calling,” he says.