Speaking engagements, awards and history give these Toastmasters a reason to celebrate. 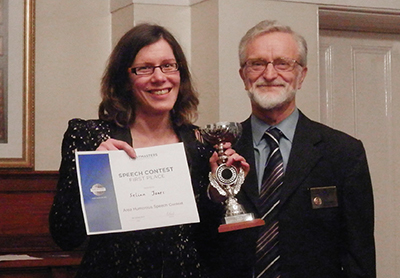 It Takes a Village

“And first place for the District 91 Humorous Speech Contest for 2015 … Selina Jones.” When I heard my name (my married name is now Griffin), I gasped. I couldn’t believe I had won!

But I hadn’t won on my own. This was a team effort. It all started in my club contest, as each speaker drew their order. Fellow contestant Richard said, “Just remember, whatever place you draw, that’s the best one.” I would speak second. When I won, I beamed as I received my first trophy—in anything, ever!

At the area contest I recognized Elizabeth, a formidable opponent. I drew to speak first. That’s ok, I thought, as I remembered Richard’s advice. When I won, Elizabeth took me under her wing and invited me to speak at her club to practice and receive feedback before division.

At the division contest, my heart sank when I saw the stage—a recessed area surrounded by walls and pillars. I walked around
onstage to devise a plan. In my speech, I had a bit about going into a basement, so I planned to step down off the stage, adding drama.

And then I was up. I took a deep breath, sank my weight through my feet to feel grounded and began. I addressed the audience left, right and center. After I won, a man from another club approached me and said, “I will be there to support you in the finals.”

The finals! I made time to explore and plan my staging. The division contest chair, who was present for the district contest, gave me one last pointer: feel and act as if you own the stage. I drew my place, walked up, grounded myself, addressed every section of the audience and became the 2015 District 91 Humorous Speech Champion.

It takes a village to win a speech contest. 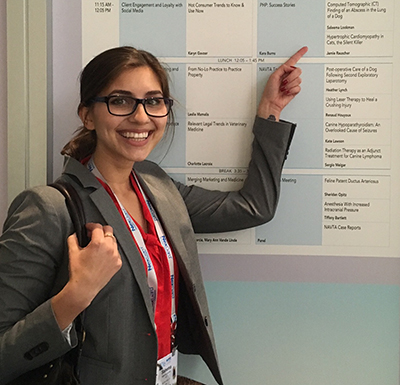 As a registered veterinary technician I had attended numerous lectures, but being the one standing onstage and sharing my knowledge seemed an unattainable dream. And then, upon learning that my case submission had been accepted and that I would be speaking at the North American Veterinary Community Conference, I knew I needed help, especially since my presentation would be judged in a contest.

I joined the Adventurers Club and was overwhelmed by the supportive atmosphere. Toastmasters gave me the confidence, skills and practice I needed to prepare for this career-changing opportunity. I was pleasantly surprised to find that Table Topics (the meeting segment I found most challenging) had helped me feel less awkward while conversing and networking at the conference.

I even took my evaluator’s advice and walked away from the lectern! I excitedly professed to my fellow Toastmasters at the club meeting following my speaking debut at the conference.

Although I did not win the contest, I had an incredible experience and was invited to speak at another forum. I know I will continue to improve throughout my journey in Toastmasters.

At the National Automobile Dealers Association’s annual convention, I stepped onto the stage as a speaker tossing fistfuls of dollar bills
into the air in front of hundreds of business owners and managers.
I dazzled them with brilliance throughout my hour-long presentation. I knocked it out of the park!

That’s how my dream ended.

In real life, this story actually started as a nightmare. I had been invited to speak at this prominent sales conference and worked for months on my presentation. I arrived at the conference crazy nervous, but prepared—except I wasn’t. Then I found out my luggage had been lost and I spent the entire first day of the conference wandering around in flip flops, shorts and a Charlie Sheen-wannabe shirt. Yet here I was, a marketing expert giving advice on million-dollar ad budgets, and I wasn’t even wearing my big-boy pants.

On the second day, my luggage arrived and I went onstage in acceptable attire and tossed around some cash. Despite the trousers
debacle, the audio-visual equipment snafu and the horrible realization that I couldn’t read notes and make eye contact with the audience using the same pair of glasses, I went on to give a perfectly mediocre speech. No one threw rotten vegetables at me and I didn’t throw up. But I did not knock it out of the park. On the plane ride home I decided that when I got back to Nashville, I would officially join the Let’s Talk Franklin club that I had been visiting.

The simple act of going to Toastmasters and standing up in front of people every week dramatically changed the way I prepare for and perform a speech. I no longer seek to memorize every word or gesture and I’m no longer a slave to my notes or reading glasses. I can stand in front of any crowd and tell a story, not from memory but from the heart. And there is nothing more compelling than a good story well-told. 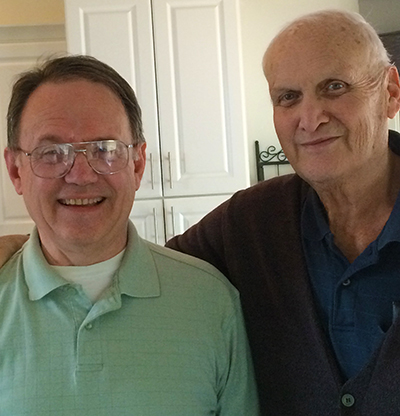 Community Toastmasters Club in Muskegon, Michigan, was chartered May 1, 1965. Fifty-one years is a long time for a club to remain active, but even more fascinating is that two men, Jack O’Malley and Gary Shedd, have belonged to that club for 50 years!

Back in l966, Gary was new in his real estate practice and felt awkward and self-conscious as he worked with clients. His boss suggested Toastmasters as a way to help him relax and enjoy building client relationships. He joined and now credits Table Topics for teaching him how to think on his feet and talk to anyone about anything.

“Toastmasters helped me learn to listen to someone give a speech and not think about other things or myself,” Gary says. “It carried over into my career, because I really have to listen to what my clients are saying so I can help them. And it’s not just listening skills that I learned, it’s also about being aware of their body language, vocal inflections and eye contact.”

Jack also joined the club in 1966. He was selling office products at the time, and like his friend Gary, he joined because his boss recommended it. Jack says, “I was scared to death of speaking in public, but everyone in the club was so helpful.” He almost quit several times, but the friendliness of the other members kept him coming back. He said women were not allowed in the club at first; however, once they did join, the club grew stronger.

The skills Jack learned in Toastmasters are invaluable to him. “I didn’t pursue a lot of formal education when I was young, but Toastmasters has given me a ‘Ph.D.’ in speaking, listening and communicating,” he says. “I am proud to be a 50-year Toastmaster, and I hope I have helped as many people over the years as have helped me.”