Channel your skills to make a move.

“Are you in the wine industry?” was a question I started to hear often. It typically happened while I visited wineries or wine bars and sometimes when I shopped in wine stores. Starting in 2014, my response changed from one of vague consideration—“I’ve always thought about it”—to one of more hopeful intent—“I’m seriously considering it.” 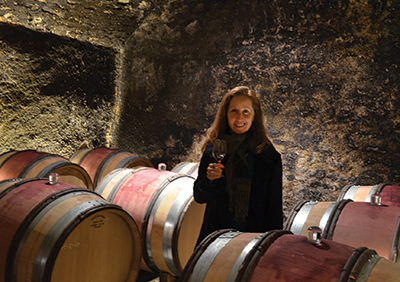 Jennifer Blanck enjoys a special tasting in Domaine des Lambrays’ cellars in Burgundy, France, as part of the wine business program she enrolled in to make a career change.

In 2015, I decided to make the career move from higher education to the wine industry. I enrolled in the School of Wine & Spirits Business in Dijon, France, to learn about the industry and the career options. To ensure the transition goes well, I will rely on one of the most valuable career tools I have: Toastmasters.

I know Toastmasters will help me because it helped me during my first career transition—from public relations to higher education—and I’m not alone. Members all over the world have relied on the skills they develop, the confidence they gain, the accomplishments they achieve and the people they meet in Toastmasters to successfully transition to a new career field.

Laurie Hallam, ACB, of The University Toastmasters in Canberra, Australia, has also made two career transitions with the help of Toastmasters. Originally an electronics technical officer for the Australian government, he switched his focus to become a military technical writer. Later, he changed to a university communications educator, teaching for 23 years before retiring.

In both cases, Hallam attributes the skills and confidence he developed in Toastmasters as essential to his success. He says, “There is something about having to speak while standing before an audience that improves clarity of thought and raises self-esteem.” Also, through Table Topics he improved his interviewing skills, something he needed when applying for the teaching position. Facing eight interviewers, Hallam channeled all of his skills to obtain the position. These types of situations, he says, showcase one of the best things about Toastmasters: “You learn to think on your feet while under pressure.”

Of course, communication skills are not just helpful for obtaining a job. They also help you perform in the position. Hallam not only had to teach many of the skills he learned through Toastmasters—such as giving effective evaluations and using meeting procedures—he also had to lead by example. 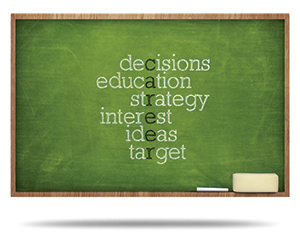 Employers worldwide are in search of people with excellent communication and leadership skills. Surveys and reports from the U.S. National Association of Colleges and Employers, UK Prospects, Business New Zealand, the World Bank and the Results for Development Institute all show communication and leadership skills among those most sought by employers.

In April, while speaking at the University of Maryland’s Robert H. Smith School of Business, Marriott International President and CEO Arne Sorenson emphasized the importance of communication skills at the highest levels.

“People need to be able to communicate, and particularly if they’re going to take big jobs,” said Sorenson.

He said he considered his communication skills one of the keys to his success. He also discussed the importance of leadership, stressing collaboration and teamwork—two skills Toastmasters know quite well.


Using Speeches as a Guide

Confidence gained as a member also helped Shawn Wang, CC, successfully transition careers within, and then beyond, the finance sector. At first, Wang moved from a financial policy-related position in the Singapore government to trading—two areas he describes as “worlds apart.” His second transition took him out of finance altogether. He now works as a product manager for a tech startup. Wang, a former member of the Leng Kee Advanced Toastmasters in Singapore, got the position by simply asking the startup CEO for the job.

“That forwardness and comfort in my own skin was definitely something I developed in Toastmasters,” he says.

However, he credits his club speeches as the key motivator to making his first transition. He says, “The more I talked about my job in my speeches, the more I realized I was settling.”

“The more I talked about my job in my speeches, the more I realized I was settling.”

Wang realized he was staying in his government position because it was comfortable, and that he wanted something more. He recommends people reflect on the topics they’re presenting and their level of engagement with those topics. If you find yourself talking about anything but your current job or field, that might be a sign.

In fact, when I first joined Toastmasters, I was working in public relations. The Public Relations manual was one of the first two I obtained after completing the Competent Communication manual. Almost 20 years later, I’ve only completed one speech in that manual.

Lazola Belle, ACB, ALB, a member of the Rosebank Toastmasters in Johannesburg, South Africa, transitioned first from an information technology professional in banking to a consultant, and then later to a combination facilitator, trainer and speaker. He also serves as a program manager for a small business that prepares young graduates for employment and entrepreneurship opportunities. He credits Toastmasters for helping him deliver a more organized message, making the interview process “a breeze” and, even more so, providing an outlet for gaining the experience he needed to make a career change. 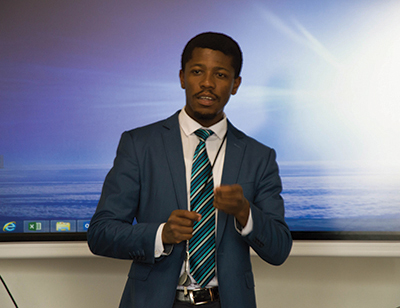 Lazola Belle, ACB, ALB, in Johannesburg, South Africa, gained experience in the Rosebank Toastmasters club to prepare for a new career as a facilitator, trainer and speaker. Belle credits Toastmasters for helping him deliver a more organized message.

Once he knew he wanted to be a facilitator, Belle began applying for jobs; the only problem was he didn’t have any facilitation experience. He developed a plan and started taking on increasingly challenging Toastmasters officer roles, including at the district level. While employed by a consulting company, he helped revive its dying corporate club. In doing so, he learned more about the company and connected with its corporate leadership. His success in rebuilding the club helped him develop a reputation for facilitating, mentoring and promotions, which led to his first professional facilitation opportunity.

Belle advocates focusing on the leadership aspects of Toastmasters, because, as he says, “No leader sits in a corner and says nothing.” He values the organization’s learn-by-doing approach and risk-free environment. When he’s been asked “Where have you shown leadership?” during interviews, he can point to many areas in Toastmasters. For example, he says, “In 2015-2016 I was division director. In my division, there were 400 members. One of my goals was to grow that to 500. I achieved that.”

That kind of description works well in interviews and in your curriculum vitae (CV), where it’s important to provide relevant context and scope to your accomplishments. When I transitioned from public relations to higher education, Toastmasters was an important entry on my CV. In fact, one of my interviewers mentioned it specifically, and my Toastmasters experience became a focal point of the discussion. Toastmasters remains a valuable CV and interview item for me, helping me showcase a number of relevant skills and accomplishments and indicating the initiative I take in my own professional development.

Making a career transition can be challenging, but that doesn’t mean you shouldn’t do it. In fact, when asked if they would do anything differently, both Wang and Belle said they would have made the move sooner. Wang highlights the importance of actively listening to other members, because their speeches and experiences may have relevance to your own life even if you don’t realize it yet.

Belle suggests getting involved beyond club meetings, even for new members, whether that means serving on a committee, volunteering for a role at a speech contest or becoming an officer.

Hallam says, “On reflection I could have improved my chances of a successful career transition by progressing more quickly through the Toastmasters program. The program teaches so many new skills.”

Take advantage of the skills developed, confidence gained, opportunities given, accomplishments achieved and contacts made in Toastmasters. I’ve already channeled my communication and leadership skills to help me with my return to school, and I know I will rely on Toastmasters when I begin my job search. I look forward to a time when someone asks, “Are you in the wine industry?” and I can answer, “Yes, I am.”

If you’re planning a career switch, these tips can get you off to a good start.

Conduct a resource assessment. Take stock of your experiences, accomplishments and skills, including your Toastmasters activities and volunteer work. Highlight the ones that are transferable or directly related to your new field. Consider your contacts, including those in your club, district and networks, such as the LinkedIn Official Toastmasters International Members Group.

Make a plan. How will you get from here to there? Set realistic goals—weekly and/or monthly ones— and continue moving forward. Be open and flexible in your learning; you might find a path you haven’t considered.

Target your message. Tailor your marketing materials, including your CV and elevator speech, to your new field, updating the materials as you learn more. Every employer looks for skilled communicators and leaders, so show initiative by highlighting what you’ve learned in Toastmasters.

Talk to people. Learn about potential paths, resources and opportunities. Attend conferences, trainings and events (in Toastmasters and elsewhere) to meet new people and expand your network. Use Toastmasters speaking opportunities to explore possibilities, test interest and practice your pitch. Ask accomplished people in your new field to review your marketing materials to ensure you’re sending the right message. Find a mentor. Stay motivated and be accountable for your goals by partnering with someone considering a transition or looking for a new job.

Have patience. Hang in there—transitions don’t happen overnight. Be good to yourself and recognize that a little perseverance goes a long way.