You may have seen Canadian actor, director and voice-over talent Lili Wexu as Dr. Hundley on Grey’s Anatomy (13th season). She also played a philanthropist in another TV series, Art of More, and a French bureaucrat in Adam Ruins Everything. And it was her voice that was heard by billions during the opening ceremonies of the 2010 Winter Olympics in Vancouver.

Of the Winter Olympics opening cere­monies, Wexu says “it was the most responsibility I’ve ever felt on a job. It was very intense. I had this little button to press every time I spoke. Simple enough, right? Well, I also had to press it when I was done speaking. I remember being scared to death of forgetting to press it after my announcements,” fearing she would be heard saying something inappropriate.

“I couldn’t believe that my entire career, everything I’d worked for, had come down to whether I could deal with this little button.” The humor in it didn’t escape her. 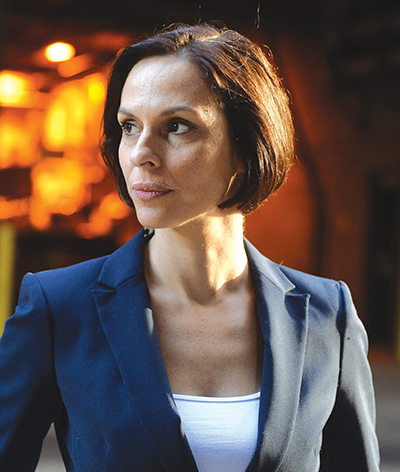 After years of auditions, acting roles and voice-over recording sessions for clients such as American Express, Google and Starbucks, where the job requires bringing meaning to other people’s words, joining Toastmasters finally gave her a chance to write her own scripts. “Doing voice-over work, it’s other people’s words that I am breathing life into,” she says. “In my acting work, when I am in front of the camera, the words are still not my own.”

She joined Fox Talkz Toastmasters, a club near Los Angeles, as a logical progression to start writing and performing her own words. “My experiences have definitely colored all of my talks in Toastmasters,” she says. And they are delivered in her own voice and style.

Wexu is not alone. Many clubs are home to Toastmasters who are exploring their acting talents and developing their voice-over skills, as well as to working actors refining their craft and finding a forum for speaking in their own voice. These actors benefit from enhancing their listening skills by evaluating other speakers; honing their own speechwriting and storytelling talents; practicing Table Topics to think quickly on their feet; and competing in speech contests to simulate the pressure of auditioning scenarios. Even without lights and camera, the Toast­masters experience provides action! 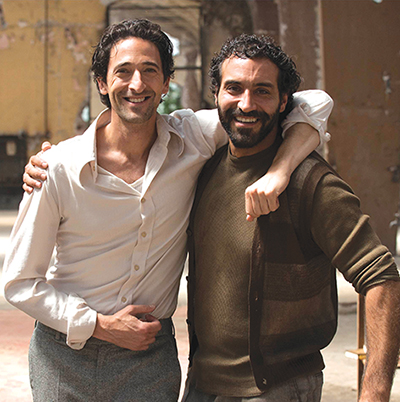 Alain Washnevsky took the long road to acting, and to Toastmasters. Born in Iran and raised in Austria, he came to the United States five years ago with a background in real estate and a dream of becoming an actor. Landing near Hollywood, in California, Washnevsky’s acting career took flight as he acquired stage and voice training and developed his body language. His acting work includes a lead role in the 2016 Academy Award-nominated short film Day One. He’s also had roles in the popular American TV series Scandal (starring Kerry Washington) and Homeland (starring Claire Danes), as well as the recently completed films Sable and Slipaway.

Possessing a deep baritone voice, Washnevsky also sings opera. He was already singing and performing in front of people when someone said to him, “Your life story is inspiring; why not share your message?” and directed him to Toastmasters. Since joining Captivating Toastmasters in 2013, Washnevsky experienced a number of breakthroughs.

The club gave him a new perspective on performing. “Everything’s not Hamlet!” Washnevsky says. “My club helped me become more conversational. I learned subtlety and how to have more of a dialogue with my audience.” 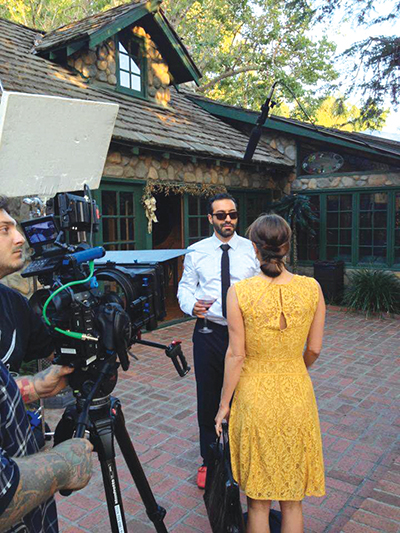 Alain Washnevsky on a film set.

He also learned speechwriting—“something I abhorred originally but now relish.” Washnevsky also developed a sense of what makes a great story. “Now when I read a script, I look beyond the words on the page to ask, What’s the message? What is the subtext?” Indeed, it is more than memorizing lines. He now derives body language and more from reading between the lines of his scripts.

Washnevsky wrote his Ice Breaker and won at the club level. He then won again at the area, division and district levels before competing in the International Speech Contest Semifinals during the 2014 Toastmasters International Convention in Kuala Lumpur, a mere seven months after joining. He then moved up to the finals and competed in the World Championship of Public Speaking® that year. 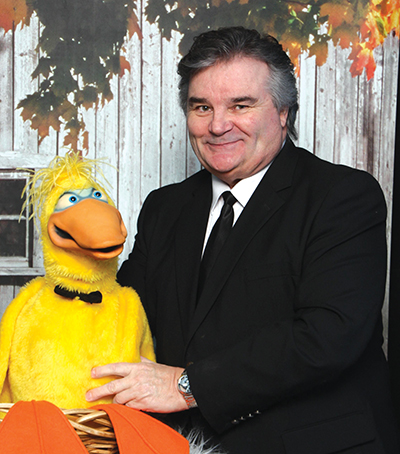 After a decade of membership, Division Director Wayne ­Stanton, of the Testament Talkers of Winnipeg, Manitoba, Canada, was challenged by veteran club member Spencer Silver: “You’ve got all these Toastmasters tools. It’s fine that you use them here and you excel. Now take them to the real world!” So Stanton traded the warmth and comfort of his supportive club for the rough-and-tumble world of stand-up comedy. Ultimately he tasted success, winning an annual Yuk Yuk’s comedy competition and the upmarket bookings that ensued. Then a friend invited the former landscape gardener to join him in a business endeavor in a world even tougher than stand-up: professional wrestling.

Applying what he’d learned in Toastmasters and on the comedy circuit, Stanton found his calling with the formation of River City Wrestling, together with his friend Dave Pinsky. Stanton, confident and credible, became an impresario. As ring announcer and guest host, “I was now the front man,” he says. “I became the greeter. Like the sergeant at arms, I welcomed people to our matches. As the ring announcer, I would dress in a suit and tie, just as if I was giving a club speech. As a moderator, I was the voice of reason among the group of zany and unusual wrestling personalities, such as Tulip in the full-body pink leotard, and Brother Midnight, who sounded like a Baptist preacher."

When he returned to Toastmasters recently, it was a natural progression for Stanton to lead as division director to serve the greater good in sight of a fuller picture of how leadership supports communication in the Toastmasters service model. 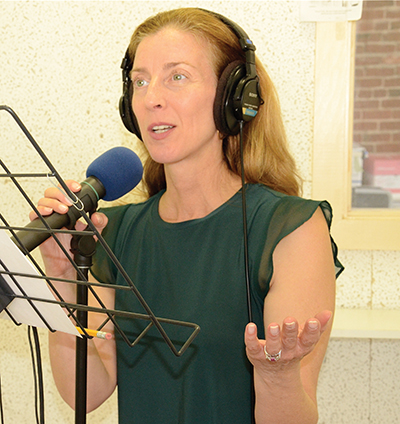 From One Voice, Many

Jo Streit of the San Francisco Bay Area, is an actor, film producer and voice-over talent. “For anyone interested in acting and/or voice-over work,” she says, “practice is the key.” A member of San Francisco’s Renaissance Toastmasters, Streit says “Toastmasters gives us so many opportunities, whether it’s Table Topics or evaluating other speakers where you perform on the fly”—particularly helpful for those who incessantly audition. And actors have to be observers of human nature, she says, “so turn your focus outward and start noticing the differences in how people speak, their intonation, speed, word choices and accents”—all things you can do in your club.

One of Streit’s long-term voiceover clients was Wells Fargo Bank, for whom Streit voiced more than 40 different characters. Since the goal was to train bank employees, various characters were needed to demonstrate the range of interactions employees would have with customers. When you play a part as an actor, “It’s not just words but your vocal variety and body language, and even props, that help bring your characters to life,” she says.

Sometimes the character notes directors gave Streit were limited to name, age and a few details related to the script’s content rather than providing guidance on vocal style and delivery. “That meant I was responsible for creating each character’s voice.” She learned to keep good notes on how she performed each character to help her play them in future sessions. She employed these talents, and more, to win District 4’s Tall Tales Contest during her time in Toastmasters.

Her recent commercial “Toymail: Connecting People One Pancake at a Time” won an award for Best Commercial at the 2016 HollyShorts Film Festival, considered “The Cannes of Short Films.” She was cast as “aunt Barbara” and even close friends and family didn’t immediately recognize her. “The character has a very different look and vocal delivery from my own … they just didn’t ‘see’ me, which is a great compliment as an actor.”

As a media coach, Streit emphasizes delivery. She dissuades speech-giving CEOs from relying on teleprompters; this often results in a monotone delivery and speakers becoming disconnected from their words. Her advice: Don’t focus on reading and ignore your delivery. “I’ve heard less-scripted leaders who meld their voice, their heart and their soul with what they want to communicate and they connect very powerfully.”

Former Toastmaster Janet Keller acted onstage in New York and San Francisco and has toured Europe. Among her credits: playing Mrs. Cratchit in A Christmas Carol at ACT (the American Conservatory Theatre), Lydia Languish in The Rivals at the Berkeley Repertory Theatre and Mrs. Webb in Our Town at Rough & Tumble. A past member of the Oakland, California’s Lakeview Toastmasters, Keller has also done studio voice-over work and public address announcing. She finds Table Topics invaluable for aspiring voice-over actors. She says, “The discipline of responding to Table Topics week after week, month after month, helps actors sink into themselves and relax.”

Keller’s advice for current and aspiring actors and voice-over talent is the same: “Always, no matter what the venue, my big tip is to breathe. That’s one that will always save you whether you’re onstage, on set, in a recording studio or at the Toastmaster lectern!”

Even without lights and camera, the Toastmasters experience provides action!

Canadian actor Wexu offers additional tips: “For voice-over work, stand up if you can, unless it’s a very long session. Engineers often give you the option. It helps the overall delivery of your performance when you aren’t restricted. Don’t be afraid to use your hands! It helps to convey your energy level. If you’re sitting, sit straight! And if you raise your voice louder than your natural speaking voice, warn the engineer so he can adjust your levels. You don’t want to blow his ears off (or damage the equipment).”

Keller intimates that many actors, despite playing large halls, are nevertheless petrified of standing and speaking their own words in a smaller, well-lit room full of strangers. Commonly, after a performance, an actor will return to the stage for the “curtain speech” to thank the audience, take questions and ask for support. Keller often gave that speech by default. Even seasoned actors can initially find speaking—outside and within Toastmasters—to be simultaneously liberating and terrifying!

To help with that, Wexu says, “Do theater, any chance you get. You’ll develop all the skills needed to be a professional actor on set, or in recording sessions.” She says Toastmasters has helped her to perform well at auditions, which are by far the most stressful aspect of the acting business. “And it helps build confidence for when you’re on set or at a recording session.”

“In this field you need a bit of luck, preparation and lots of patience!” adds Wexu. “Good things happen when they are meant to, if we’re prepared.”


As Toastmasters around the world turn to acting and develop their vocal talents, and as actors discover Toastmasters and get support refining their technique, the club experience helps them in numerous ways. Toastmasters is a place where actors, announcers, voice-over artists—and anyone—can find their own voice, and go from one voice to many.