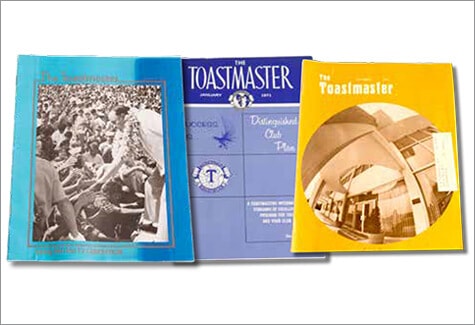 Editor’s Note: This article is condensed and updated from a story by Janet Whitcomb that originally ran in the April 1993 Toastmaster magazine.

Back in April 1933, a publication measuring no more than 6 inches by 3.5 inches (about 15 centimeters by 9 centimeters) was circulated among members belonging to each of the 20 Toastmasters clubs in the United States and Canada.

Printed in orange stock and displaying a copyrighted title, logo and the inscription “Vol. 1, No. 1,” it offered 18 pages of club information and news, including updates on club attendance and new officers.

Toastmaster magazine has come a long way in the 82 years since that debut issue. With Toastmasters International now boasting more than 1,450 clubs in 126 countries worldwide, today’s magazine reaches a membership of more than 300,000. Now 32 pages long and measuring 8.25 by 10.75 inches (about 21 by 27 centimeters), it features articles on communication, leadership, humor, team building, cross-cultural awareness, mentoring, speechwriting, club successes around the world, the latest presentation tools and technology, and more.

The Toastmaster of 2015 is also a reflection of the digital era: Besides the magazine’s print edition, downloadable versions and select articles are available on the Toastmasters website, and readers with tablets can access digital issues via a mobile app. The tablet magazine, which debuted in 2013, enhances the print offering with interactive elements such as video, Web links and photo slideshows.

Despite the dramatic differences in the Toastmaster magazine of then and now, the basic goal remains the same: to serve members interested in improving their speaking, listening, leadership and thinking skills.

Humble Beginnings
In 1924, after Ralph Smedley established the organization’s first Toastmasters club in Santa Ana, California, a growing number of clubs emerged over the next few years. To keep members apprised of each other’s activities, Smedley, in collaboration with two other Toastmasters, began publishing a mimeographed newsletter in 1930. Named The Gavel, each copy comprised two stapled sheets of paper.

From such humble beginnings sprung the concept of a bona fide magazine. The new publication was sent to nearby Los Angeles to be printed and bound, then mailed to each club’s secretary for distribution among members.

After the premiere edition in April 1933, two more issues—measuring slightly larger in size—were produced in 1934. The following year, a set of ground rules was developed: The Toastmaster (for most of its history, the magazine’s name included “The” before the word “Toastmaster”) would be issued on a quarterly basis to those who paid the 1 USD annual membership fee. And, by popular request, all magazines would now be sent directly to individual Toastmasters.

Throughout the decade, the magazine continued to arrive in households four times a year. But beginning in 1940, it was produced every other month, and six years later, as the U.S. entered a prosperous new postwar period, the magazine settled into its current publication schedule of once every month.

The appearance of the magazine also evolved. Photographs and artwork, used sparingly if at all during the publication’s first decade, decorated its pages and covers with increasing regularity. As the years passed, more pages were added and the magazine’s dimensions grew larger.

For many years, the magazine cover was dotted with a little color, but the 50-year anniversary issue is the first time the cover was in full-color, using a four-color printing process. An illustration of Smedley adorns the front of that January 1974 issue.

During the 1970s, occasional smatterings of color could be found on the magazine’s pages. For example, an August 1974 article titled “They Speak a Universal Language” is highlighted by a headline of red and green print and full-colored reproductions of Mickey Mouse and Donald Duck. (The International Convention was held at Disneyland in Anaheim, California, that year.)

By the late 1980s, color print and photographs were used on two or three of the main articles in each issue. In 2002, the magazine began using color throughout the entire issue—and the publication has only become more colorful and visually inventive since.

Time Marches On
From the beginning, the magazine staff solicited opinions and contributions from its readers. The back cover of the first issue, for example, asked Toastmasters to “Obey that Impulse! Write the Editor and Tell Him What’s What!” At first, such contributions were compiled in periodic club reports. Eventually, however, a letters section was added to the magazine, and full-fledged articles—many of them written by members—soon appeared.

Today the magazine continues to feature articles written by Toastmasters and others. (The sheer number of contributions is impressive; the editors suggest would-be authors consult the magazine’s guidelines before submitting their prose for review.)

The magazine has not gone untouched by current events. Issues published during the Great Depression, for example, featured many articles and commentaries stressing the importance of Toastmasters training to men disenfranchised by a stricken economy.

During the years of World War II, many Toastmasters were called to serve their country. Civilian adjustments were also typical: Club meetings were sometimes canceled, as was the 1942 Seattle Convention. In the January 1942 issue, an article titled “Our Service to Men in the Service” discussed the importance of bringing Toastmasters training to the enlisted men who soon would be defending the principle of free speech.

Two decades later, on November 22, 1963, the sudden and tragic death of U.S. President John F. Kennedy brought tributes from Toastmasters around the world. Members realized that in losing one of the prime world leaders of that time, they had also lost a gifted and well-spoken orator.

Thomas Healy, president of the Scarborough Club in Ontario, Canada, wrote, “As a Toastmaster, listening critically to his many powerful speeches [as well as] to his impromptu and often humorous asides, I have been delighted and proud to have lived in the times of John Fitzgerald Kennedy.”

Those who thumb through pages of decades-old magazines soon begin to sense that an important part of the equation seems to be missing. This omission, however, was resolved in 1973, when Toastmasters International opened membership to women. Articles in the magazine soon began to reflect this dramatic change.

Fast-forward to 2015. The publication covers a wide range of issues that impact members around the world, from valuable club resources to the latest in storytelling strategies, from innovative Toastmasters leaders to experts on body language, from Table Topics® tips to organization initiatives such as the revitalized education program.

Change remains a constant for the 82-year-old magazine—as shown, for example, by the emergence of the online “flipbook” version in 2011 and the tablet edition two years later. As its evolution continues, Toastmaster magazine will continue to publish content that best serves you, its reader.

The Toastmaster magazine staff is comprised of five editorial team members. Learn more about them on the Staff page.