Ask yourself these 10 questions to get the laughs you want. 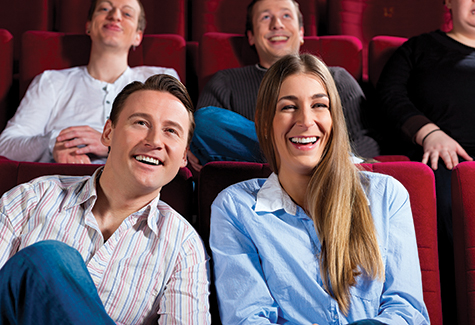 When you turn on a light switch, you expect results. You expect the light to go on. If it doesn’t, you run through a checklist to correct the problem. Is the lamp plugged in? Is the light bulb burned out? Is the fuse blown? The same process is true of using humor in your presentation. You want the audience to laugh, and if they don’t, you need to figure out how to fix the problem.

This 10-point checklist will help you correct flaws so your humor will be effective.

1 - Does your humor end with a surprise? Surprise is an essential element of comedy. You often hear storytellers say, “Stop me if you’ve heard this one.” They realize that if you already know the ending, the joke has lost its power.

Your ending must be unexpected, a twist, a surprise. The suddenness of that surprise is the jolt that produces the laughter you want.

Whatever your punch line is, be sure the audience doesn’t see it coming. You might have to misdirect listeners—lead them to think in one direction and then suddenly redirect them to your real meaning.

2 - Is your humor based on recognizable reality? Each joke or tale you tell must be truthful. The listeners can only respond to your humor if they recognize the reality it is based on. This doesn’t mean you can’t be whimsical. Your truth doesn’t have to be the kind you swear to in a court of law. It can be exaggerated, distorted and hypothetical, as long as your audience can relate to it. You want people to think, Yeah, that has happened to me, too.

3 - Can you be heard and understood? People cannot laugh at a joke they don’t hear. In delivering humor, you must speak loudly enough to be heard by your entire audience or use a dependable sound system that will accomplish that for you.

In addition, speak clearly and distinctly, so the audience can understand the meaning of your message. Your vocabulary, too, should be appropriate for your audience. If you use words they don’t understand or phrases they’re not familiar with, they’re really not hearing your joke.

4 - Is your humor current? Humor should be up-to-date. Avoid any nostalgia. Your stories don’t need to be about current events, but they should be appropriate for current times. Use contemporary references and ideas.

5 - Is your humor concise? William Shakespeare said “brevity is the soul of wit.” That’s good advice, but it doesn’t necessarily mean that shorter is better. There are at least two parts to every joke—the setup, which furnishes information, and the punch line, which is the surprise twist to that information. Both are essential.
Economy may be a better word than brevity. Being concise means giving the listeners all the information they need to appreciate and understand the punch line, but not offering unnecessary information that weakens the effect. A workable rule of thumb: A joke that should be short and is, is better than a joke that should be short and isn’t.

6 - Does your humor create a vivid image? Although humorists work primarily with words, audiences “see” images. The more vivid picture you create in their minds, the better response you’ll receive.

There is a well-known line from the 1977 film Annie Hall, where the character played by Woody Allen says to his girlfriend: “There’s a spider in your bathroom the size of a Buick.”

That gag worked because it instantly evoked a funny mental picture. The character could have described the spider as “a big bug” or even said, “It was as big as a car.” But the word “Buick” conjures up a more vivid image.

7 - Are you letting the audience know when to laugh? Presenting humor is like conducting an orchestra: You must control the tempo. You not only want your audience to laugh, you want them to laugh at the proper time. Therefore, you, as the conductor, must tell them when to laugh. Do that through voice inflection, gestures and facial expressions, and with the phrasing of your story.

As you prepare your presentation, know exactly where you demand laughter from your audience. If you don’t know, how can they be expected to?

8 - Are your references applicable and appropriate? Much humor consists of comparing two ideas. One is the basic topic; the other is a humorous reference to that topic.

An example: “I have a friend who is so cheap; he buys one Christmas card each year and sends it out in the form of a chain letter.”

The basic topic is the frugality of this person, and the reference is a Christmas card that circulates at other people’s expense.

Here’s another comedic reference to being cheap: “My friend always leaves a 20 percent tip—20 percent of what anyone else would leave.”

In creating humor, search for as many references as you can. The more you discover, the more ammunition you’ll have to generate effective comedy. Just make sure they’re applicable and appropriate.

9 - Is your humor right for this audience? Is this audience right for your humor? Certainly two components of humor are the presenter’s skill and the material’s quality. However, consider another key element: the audience. The more your humor applies to the people you’re directing it at, the better response it will get. Perform material your listeners will appreciate.

Remember that the audience is the final judge of your comedy. If they laugh, it’s funny. If they don’t laugh, it needs work.

10 - Is your humor clever and incisive? Humor is all around us. It’s up to the humorist to uncover it and expose it to listeners.

For example, take this line: “Any time you see a man open the car door for his wife, you know right away that either the car is new, or the wife is.”

People quickly recognize the irony of that line, but only after the comic points it out to them. As a humorist, your duty is to uncover truths, idiosyncrasies, ironies and contradictions, and then couch them in a unique way that produces laughter.

Follow this checklist, and both you and your audience will enjoy lots of laughs.

Gene Perret is an Emmy Award–winning writer who has written for legendary comics such as Bob Hope, Phyllis Diller, Carol Burnett and others. His latest book is The Ten Commandments of Comedy. Visit his website at comedywritersroom.com.