The Handshake: A Non-Verbal First Impression 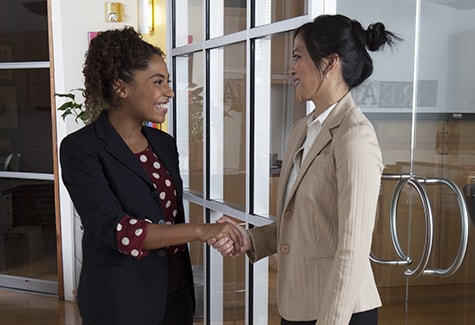 One form of the handshake is said to have originated centuries ago as a strong arm and handclasp to check if the other person was armed. It was used as a way of dislodging weapons hidden in sleeves in medieval times.

Today, handshaking is used to greet others, congratulate someone or seal an agreement—not to check for weapons.

In Toastmasters, we shake hands often, not only as a greeting but also as a way of relinquishing control of the meeting to the next speaker. As a Toastmaster for more than 10 years, I have shaken many hands. Some handshakes stand out—for better or for worse. In the latter category, I have experienced “wet fishes,” “bone-crushers” and “socket-wrenchers.”

The simple gesture of shaking hands relays a message, and it can make or break a first impression.

To Shake or Not to Shake

In many cultures people don’t shake hands. If you intend to visit another country, it’s worth finding out the proper way to greet others.

In Japan, people bow. With heels together and palms on thighs, both men and women bow from the waist. The deeper the bow, the more respect is paid to the other person. There are strict rules attached to bowing, and, although foreigners are not expected to be experts, an attempt made at following protocol is usually appreciated.

If, however, you’re visiting a Toastmasters club in Japan and many other parts of the world, shaking hands is likely the norm conforming to club tradition.

“We don’t normally shake hands in Japan when greeting each other, but at our Toastmasters clubs we do shake hands, as it’s the Toastmasters way,” says Sumiko Futana, a member of the Kitakyushu club in Fukuoka, Japan.

Dr. Kevin Lee was born in Malaysia and is now a major in the British army medical corps. He is stationed in the United Kingdom but takes many trips abroad and has visited Toastmasters clubs

in a number of different countries. From what he has observed, people shake hands in Toastmasters clubs even in countries where handshakes are not a common greeting.

“It’s a Toastmasters tradition,” says Lee, a member of two clubs in Scotland. “Shaking hands is done in districts all across the world.”

Shaking hands at Toastmasters is a way to hand over control of the floor when announcing speakers. But despite tradition, some club methods do vary. If you don’t know the behavior of a club, take your lead from the meeting leader. And if you’re still unsure, allow others to reach out to you first, since an unwelcome handshake can be more embarrassing than no greeting at all.

For example, in some clubs, especially during flu season, members may use elbow bumps, fist bumps or a nod of the head to avoid spreading germs. And some members may have religious reasons for not shaking hands.

However, when it’s welcomed, a handshake creates a brief connection between two people. A good handshake—when hands are aligned, grip pressure is equal and eye contact is made—creates a positive impression.

It’s important, therefore, to pay attention to your handshake, whether it occurs at a Toastmasters meeting or elsewhere. And shaking hands in club meetings is good practice for life outside the club, such as at business and social gatherings, where first impressions can be crucial.

What constitutes a bad handshake? Body language experts Allan and Barbara Pease identify some in The Definitive Book of Body Language.

The Bone-crusher: This person grabs your hand and squeezes hard. Musicians and arthritis sufferers may want to avoid shaking hands with the bone-crusher. The handshake is painful and can also damage your hand.

The Stiff-arm Thrust: Determined to keep a person at a distance, this hand shaker will stretch out his or her arm to clasp your hand, preventing you from coming closer.

The Socket-Wrencher: Unlike the stiff-arm-thrust hand shaker, this person uses a strong grip to pull you into his or her space. It can sometimes feel as if your arm is parting company with your shoulder.

The Pump Handle: This over-enthusiastic hand shaker grabs your hand and energetically pumps it up and down. Sometimes this person holds on for too long, not knowing when to stop.

The Wet Fish: This flaccid, clammy handshake can indicate that the person suffers from hyperhidrosis (the medical condition of excessive sweating), or is extremely nervous.
A version of this article appeared in the February 2015 issue of the Toastmaster magazine.

is a freelance writer and communication coach. She is a member of the Waverley Communicators club in Edinburgh, Scotland.