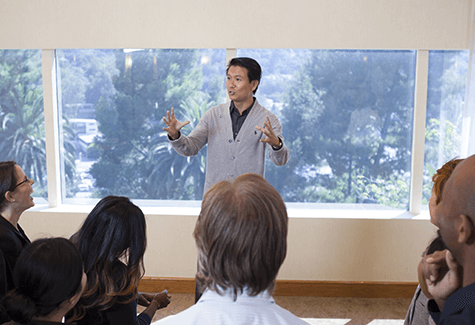 Has this ever happened to you? You have a “really funny story” about something that “really happened” and you’re excited to tell it at your next Toastmasters meeting. But when you do, you’re met with deadly silence. “Well, I guess you had to be there,” you mumble.

Yipes! What happened? How can we re-create real-life humor when in front of an audience? As a longtime comedy coach and author of a how-to guide on comedy, I have some tips.

1. Capture Laughs as They Happen
The best way to write killer material, the kind that rocks a room and threatens to cause hernias in people laughing too hard, is to capture events and details that get laughs as they happen. When you plot out “funny” stories while sitting at a computer, those stories can sound literary, and not like something that really happened.

When you see something funny, write it down on a notepad or record what is happening on your smartphone. These are great ways to save special moments. When you get home, review your notes or transcribe your recording. If the incident made you laugh, it will probably get a laugh onstage.

Let’s say you’re at a party and the subject of bad dates comes up. You join in with stories about your own dating problems and you get laughs. Write those stories down. Capture the energy of your delivery and save it for your audience.

Have you ever had a fight with someone that turned funny? There you are, two people yelling at each other when suddenly you take a right or a left turn into the funny zone. You’re still angry, but you both start laughing. Write down the details before the other person does—so they won’t accuse you of stealing material!

Or what about this: While shopping with a friend, you look at yourself in the mirror and notice you’ve gained weight. Instead of calling yourself a worthless tub of lard, riff on your bulging midriff and tell yourself about the advantages of being fat. Flaws can be funny. You have leaped into the funny zone. Write it all down.

Start mining your own life for laughs and you’ll find a gold mine of material to use for the Humorous Speech Contest.

2. Get a Comedy Buddy
Jimmy Fallon, Tina Fey and Ricky Gervais don’t develop material alone—and neither should you. Running material by a comedy buddy is an important step to take before trying things out on an audience. You want a critic and a friend who will be your sounding board. Note to comedy buddy: Be honest, but gentle, in the feedback you give.

When working with a comedy buddy, be careful not to shoot down any ideas. Your job is to add to them. A productive comedy session is like a hot game of ten¬nis. Play only with someone who is going to return your ideas and maybe even put a new spin on them. If you keep serving and your comedy buddy never gets the ball back to you, think about working with someone else.

To find a buddy, post a note at myspeakerbuddy.com, a social network for aspiring speakers.

3. The Holy Grail of Comedy—The Act-Out
If you tell a story that got laughs somewhere but doesn’t hit the mark at your Toastmasters meeting, try acting out your dialogue. An “act-out” is when a comic or speaker animates the people he’s talking about in a scene, which typically scores big laughs. It’s not show and tell; it’s show, don’t tell. Instead of talking about someone or something, perform for your listeners by becoming the person or thing that you mention in your story.

Here is an example of an act-out from veteran comic Wanda Sykes. “I was hanging out with my little nephew, and the kid, he had a helmet, shoulder pads, knee pads, shin guards and gloves. And he says, ‘I’m going to ride my bike.’ I’m like, ‘Where? Through a minefield?’”

The boldface portions indicate where Wanda acts out the character—both when the boy makes the statement about his bike, and when she replies. Practice the effect by reading the example aloud.

An act-out makes your story come alive. It gives it immediacy. The more you, as a storyteller, embrace the full emotion and tone of the character, the funnier your presentation will be. Try this with several different scenarios to see how it helps your presentations.

4. Keep Away from Clichéd Material
Comedy novices are sometimes tempted to use worn-out, clichéd material—especially graphic stuff they think will shock people into laughing. This is trying too hard to get a laugh rather than simply telling a funny story. Forced, clichéd material deals with bathroom topics, sexual topics, ethnic stereotypes or any of those things that have been done to death. Don’t go there!

One thing that has not been done to death is your truth, the original story that you tell. Communicating with authenticity will get you laughs.

Let’s face it, some of you have told the same story over and over again—even when it no longer works. It’s like eating leftovers. For a long time I did a routine about my biological clock running out and how I wanted to have children, and it always got a laugh. Then suddenly it stopped getting laughs. It was nothing I did—I didn’t change the language, the timing or the attitude—it just stopped working. I realized it was over.

The best comedy is fresh, original and timely. Funny is all around you. Write down what you see. Keep a journal of what is happening today to draw laughs tomorrow.

doesn’t like to brag, but she did write the Bible. No joke, she’s the author of The New Comedy Bible and The Comedy Bible Workbook. These books contain exercises from her renowned Hollywood comedy workshop, which launched the careers of Seth Rogan, Maz Jobrani, Hannah Gadsby, and many others. During COVID-19, Judy is offering her online speaking and comedy classes for free. Sign up at www.thecomedybible.com.