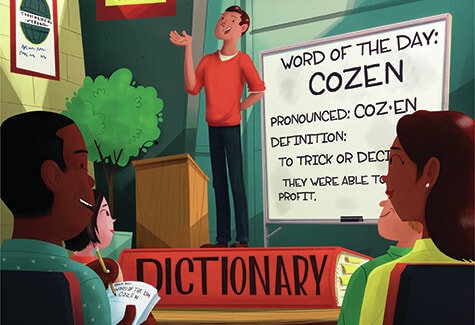 If you are a word nerd like I am—a person who loves words, and actually gets excited about them—then you probably share my enthusiasm for the “Word of the Day” feature that is part of every Toastmasters meeting.

I admit that I am one of those odd people who actually read the dictionary from time to time. Not the same way I read a book or magazine, but for 10 minutes or so at a time, thumbing through the pages or perhaps focusing on a particular letter of the alphabet. I always note with amazement all the words that I, as a native speaker of English—and, I would like to think, an intelligent and literate one at that—still do not know.

Let me do a little experiment to prove my point. I’ve just grabbed my dictionary and opened it randomly to a page. It’s under the C’s, with “cow” and “crab” at the top. I scroll down a bit and come to … “cozen.” That’s right—cozen. Have you ever cozened anyone? I hope not. It means, basically, to trick or deceive.

In all fairness, it should be noted that the English language now has more than a million words, according to the Global Language Monitor. Nearly 15 new ones come into existence each day. Who can stay up to date on all that?! (Granted, cozen is not one of those newer ones—the dictionary says it was coined in 1573.)

In any case, the Word of the Day is a chance for all of us to expand our working vocabularies. According to a 2013 article in The Economist, the average native speaker of English has about 20,000 to 35,000 words in his or her vocabulary. Surely, regular attendance in Toastmasters—listening to people’s speeches, and paying attention to the Word of the Day—can add many new words to your working vocabulary over time.

But what should club grammarians aim for when choosing a Word of the Day? Should they look for some exotic, obscure word that no one in the club has ever heard of? Or, should they choose a word that perhaps people are familiar with but tend to use or pronounce incorrectly? Even in everyday business writing, there are probably hundreds of such words—and many of us could use a reminder on when and how to use them appropriately. My opinion? Both approaches are valid, and most clubs would do well to weave each one into the mix.

Add a Touch of the Exotic
Here are two advantages to the exotic or esoteric approach:

Some of these words are just fun to use or say. For example, did you know that “osculate” is another word for kiss? What Toastmaster wouldn’t get a kick out of learning that and going home to his or her loved one and asking, “Hey, do you want to osculate?” At a recent meeting of my club, the Toastmaster of the Day chose “jollification” (merrymaking). Most of us had fun uttering this mellifluous five-syllable word. One member gave a speech about appreciating beer, and I evaluated it, so for both of us it was a no-brainer to incorporate the Word of the Day!

Working these words into speeches can be a creative challenge. Obscure words are more difficult to incorporate into speeches, but therein lies an enjoyable challenge. If your club’s Word of the Day is “defenestrate” (to throw someone or something out of a window) and your speech is on how to deal with frustrating computer problems—well, you know where I’m going with this one.

When using this approach, try to pick words that are more general, that lend themselves to a wide range of topics and themes. The English dictionary is chockfull of jargon—zoological, botanical, medical, and other scientific and technical terms, for example. But it is unfair to expect your fellow Toastmasters to work these types of words into their speeches in any kind of meaningful way.

The Benefit of Using Simpler Words
Truth be told, I am partial to the second approach—choosing a word that is more common and familiar, and that has a more practical, everyday application. There is one major advantage to this approach: A prime goal of Toastmasters is to make us better communicators, and we usually communicate best by using simpler words.

Lots of folks think using big words makes them sound smarter, but I’m here to tell you it isn’t so. Some of the best writing in the world—The New York Times, for example—is written at a high-school reading level. Plain language is where it’s at.

Dr. Martin Luther King Jr.’s famous “I Have a Dream” speech—one of the most memorable in modern history—was written at a 9th-grade level. Dr. King knew that the key to reaching his listeners was using not fancy words, but the right words.

Why not use the Word of the Day to help increase your fellow members’ proficiency with common, everyday words they can use in their daily communication. To that end, here is an important category of words to focus on: those that are often confused with similar words and thus used incorrectly.

Perplexing Word Pairs
How about helping your club members sort out the multiple meanings and pronunciations of “effect” (this can be a noun or a verb) and “affect” (which can also be a noun or a verb)? Or understanding when to use “lay” versus “lie”? This gets into some grammar issues, but hey, isn’t that part of Toastmasters as well? Even experienced speakers sometimes confuse such pesky words. A few weeks ago, I heard a U.S. senator mistakenly use “regime” when he meant “regimen.” Other problematic pairs: “loath” versus “loathe,” “capital” versus “capitol” and “flaunt” versus “flout.”

Think about how your writing and public speaking will improve if you master some of these challenges. You’ll save yourself from the embarrassment of writing “Our organization will be hosting an imminent scholar” when you really mean “eminent.” No longer will you talk about what someone “inferred” when you really mean “implied.”

How to Present your Word
Whichever approach you use for the Word of the Day—the exotic or the everyday—make sure you present the word correctly on the meeting agenda. If the pronunciation is tricky, use an accent mark or bolded type to show which syllable should be stressed. Indicate what part of speech the word is—noun, adjective, verb or adverb. If there’s an interesting story behind the word, such as where it comes from, give some of that detail to help the word stick in people’s minds. And offer one or two sentences that demonstrate how the word should be used.

Unfortunately, I’ve been at meetings when the Toastmaster of the Day mispronounced his or her own Word of the Day, or provided an example in which it was used incorrectly. When this happens, not surprisingly, other speakers may follow suit and botch the word as well.

It’s all in good fun, though. That’s the great thing about Toastmasters. Even when we make a gaff—sorry, make that gaffe; a gaff is a hook that fishermen use—our fellow club members laugh with us, not at us, as we all work together to build our vocabularies, speaking skills, confidence, leadership and character.

is a member and past president of Randallstown Network Toastmasters in Baltimore, Maryland. He works as a communicator for the research program of the United States Department of Veterans Affairs.