The History of Toasting 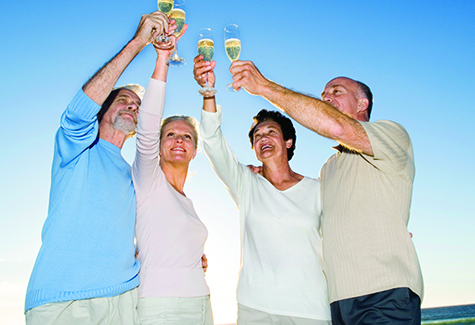 Every day around the world, cultures celebrate, honor and signify meaningful events with toasts, usually involving a libation, heartfelt words and the clinking of glasses. Whether toasting the Almighty, the head of state, the wedding party or an award recipient, we toast for health, wealth, happiness, safe passage, healing or any of a number of noble and sometimes frivolous aspirations.

Yet few people know the history behind this ritual. It’s a tradition that began centuries ago. “The ancient Hebrews, Persians and Egyptians were toasters, as were the Saxons, Huns and other tribes,” Paul Dickson writes in his book Toasts: Over 1,500 of the Best Toasts, Sentiments, Blessings and Graces.

In his 18th-century history book The Decline and Fall of the Roman Empire, Edward Gibbons wrote about toasting, Dickson notes. Gibbons described a feast among the Huns at which their leader, Attila, led no less than three rounds of toasts for each course of an elaborate dinner.

Ancient Greeks drank to each other’s health and welfare. In The Odyssey, Ulysses drank to the health of Achilles. The idea of poison—which was a potent weapon in the sixth century B.C.—also came into play. According to David Fulmer’s book A Gentleman’s Guide to Toasting, toasting was “a good faith gesture to assure the drink wasn’t spiked with poison.” The best way to prove a drink was safe for sipping was to take the first sip. Just as a handshake assured others that nothing was hidden up one’s sleeve, drinking a shared libation in front of others signified to all its worthiness for consumption.

The Romans built upon this Greek custom of drinking to others’ health and well-being: They added toasted bread crumbs to their goblets, reducing the acidity of the often bitter wine. Thus came the appellation “to toast”— referring to the drink itself—from the Latin term “tostus,” meaning “to dry up" or "scorch." In Rome, "drinking to another’s health became so important, the Senate decreed that all diners must drink to Augustus [the first Roman emperor] at every meal,” Dickson writes. “Fabius Maximus [the Roman politician and general] declared that no man should eat or drink before he had prayed for [Maximus] and drank to his health.”

The Clinking of Glasses
The toasting custom spread throughout Europe and England, where for the first time the clinking of glasses accompanied the ritual. Whether its intent was to mix the content of each other’s glasses so everyone drank the same grog (lessening the likelihood of being poisoned), or to add sound to the experience of taste, touch, smell and sight, no one is sure.

In the 17th century, toasting became very popular, says Dickson. Eventually, the position of “toastmaster” emerged. In England, the toastmaster presided over events, delivering and soliciting appropriate toasts. “In those days the duties of the toastmaster tended to be referee-like in that his main function was to give all toasters a fair chance to make their contribution,” writes Dickson in his book.

He adds that one of the earliest books on toasting—if not the earliest—was The Royal Toastmaster by J. Roach, published in London in 1791. Roach’s view was that the toast is a very powerful ritual. Consider this passage from his book:

A Toast or Sentiment very frequently excites good humor, and revives languid conversation; often does it, when properly applied, cool the heat of resentment, and blunt the edge of animosity. A well-applied Toast is acknowledged, universally, to soothe the flame of acrimony, when season and reason oft used their efforts to no purpose.

To this day, one can find the National Association of Toastmasters in the United Kingdom—whose trained members wear ceremonial red dinner jackets and are skilled at oratory, poetry and toasting. They emcee events of all varieties, from weddings and funerals to christenings and fundraisers.

Dickson describes a Golden Age of toasting in America during the 40-year period from approximately 1880 to 1920. Many prominent authors wrote toasts, toast books and pamphlets were published, and newspapers ran columns on the subject. One periodical, The National Magazine, had its own Toasts editor, whose duties included judging the best toasts in a monthly contest, Dickson says.

Traveling Toasts
Worldwide, numerous nations and cultures have their own toasting customs. Many are similar to each other yet others are unique. For example, in Japan, China and Korea, the customary toasts sound very similar but are pronounced differently. According to the Matador Network (www.matadornetwork.com), a site devoted to travel journalism, toasters in Japan say the word kanpai and pronounce it “kan-pie”; in China they say gan bei and pronounce it “gan bay”; in Korea they say gonbae and pronounce it “gun bae.”

And Korean toasting customs differ from the Japanese. “In Korea, the glass is emptied and the last few drops are shaken out, then it is passed to the guest and the host refills the glass,” says the website Etiquette International (www.etiquetteinternational.com). “A glass is never refilled until it is completely empty in Korea, whereas in Japan the glass is constantly refilled so it is never empty.”

If you’re going to make a toast in another country, notes the site, be sure to find out the toasting customs there “before putting your foot in your mouth.” “Toasts don’t necessarily translate well, especially if they are idiomatic or poetic,” adds Etiquette International. “It’s a good idea to stick to safe topics like friendship, the enjoyment of life and health.”

The ancient and international tradition of toasting is no doubt one that will endure for many more years. Let’s hope the future of the toast is as engrossing as its past.

is a professional speaker, a Certified Virtual Presenter, and a charter member of Silicon Valley ImprovMasters in San Jose, California. Visit www.ExpressionsOfExcellence.com for more information.