Toastmasters' Youth Leadership program is popular – and it works. 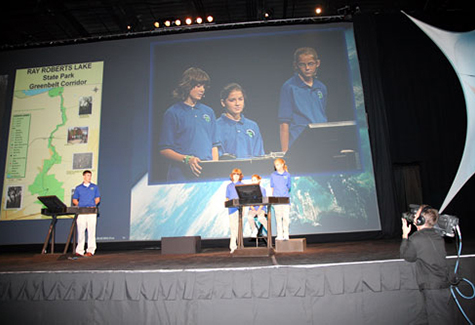 Thirteen-year-old Shelby Kilpatrick and her 10-year-old twin sisters, Lauren and Kaitlyn, were only a "little nervous" the day they spoke for an audience of 14,000 at the 2006 Environmental Science Research Institute’s international conference in San Diego, California.

"Once we started talking, everything was fine," says Shelby. Their speech discussed the trio’s 4-H project in which they used a GPS system to create a trail map for the Texas Department of Parks and Wildlife. Ask the girls how they remained calm and capably spoke in front of all those people, and they gladly credit Toastmasters.

Thanks to an eight-week Youth Leadership program sponsored by the Denton Toastmasters club in Denton, Texas, the Kilpatrick sisters received extensive training on presentation skills and leadership.

"The classes were really fun," says Shelby, who speaks often during her 4-H work. [4-H is a youth organization sponsored by the U.S. Department of Agriculture.] "My sisters and I learned to be calm and to present our information so that people understand it. Now I really like giving speeches. It makes me feel important to get up there and talk about things that people enjoy hearing. I also learn a lot when I put together my speeches."

Shelby’s mom, Susan Kilpatrick, saw a great deal of change in Shelby and her sisters after the Toastmasters training.

"They’re pretty much fearless today," says Susan. "Learning to speak in public built their communication skills and confidence and enabled them to develop charisma and capture attention. They volunteer all the time for tasks that require leadership roles and easily work with groups, organizing other children and communicating what needs to be done."

Creating outgoing, well-organized, motivated children is the goal of Distinguished Toastmaster Ron Clark. The 30-year member is president of the TV Toastmasters club in Dallas, Texas, and began the Youth Leadership training in 2004.

"We’ve seen the training program really take off," says Clark, who is also secretary for the Texas Jumptart Coalition, which seeks to improve the financial literacy of young adults. "My first Youth Leadership class in 2004 consisted of nine students," he says. "Now I get calls all of the time. I’m currently scheduled to do several workshops for home schoolers, high schoolers, middle schoolers and elementary students."

"Before the [Youth] Leadership classes, we never did any kind of speaking, and now we speak all of the time," Kaitlyn says. "It's easy once you know how."

Designed to develop speaking and leadership skills for adolescents and teens, Toastmasters’ eight-week Youth Leadership program is similar to a regular Toastmasters meeting. Classes last about two hours, and the students run the meeting while the coordinator provides training and guidance. The informal course focuses on teaching students communication and leadership skills. They learn to overcome nervousness when speaking in front of groups, to organize and present ideas logically and convincingly, to listen carefully to the ideas of other students, and offer helpful advice.

"Children learn hard skills like math and science in school, but speech training teaches them important soft skills such as leadership, creativity, persuasiveness and organization," says Clark, pointing out that mastering these talents in Toastmasters made him successful in his career as an engineer.

Parents and Toastmasters teaching the Youth Leadership program say kids benefit by learning speaking skills at a young age. "The sooner you teach children about public speaking, the better," says Susan Kilpatrick. "If you catch kids before they have that fear of speaking in front of people, they’ll probably miss that hurdle altogether and go on to be great communicators and leaders."

Abe Birnbaum, DTM, a member of the Denton Toastmasters club, has assisted Clark with Youth Leadership training and agrees with the importance of teaching children presentation skills as early as possible. "Kids take to speaking readily because they haven’t learned to be embarrassed yet," says Birnbaum. "This sort of training is one of the best benefits you can give them and it will stay with them for the rest of their lives."

Thanks to the leadership and speech training classes, 10-year-old Lauren Kilpatrick feels she can speak in front of anyone now. "The classes helped me do things that I thought I couldn’t do. Now I’m not afraid to speak, and I can talk about anything at any time. I was a princess in a personality contest recently and they interviewed me, and I just got up there and said something, and it was okay."

Lauren’s twin sister, Kaitlyn, agrees. "Before the leadership classes, we never did any kind of speaking, and now we speak all the time," she says. "It’s easy once you know how."

Their older sister Shelby found Table Topics to be especially helpful. "I’m able to think on my feet now, and I can put together a speech really quickly," she says. "I recently did a speech for the Denton County Livestock Association Youth Fair on honeybees. I wrote the speech and gave it the same day. I talked about some general information about honeybees, including how they live and the different products that they create like honey and royal jelly. The speech was judged, and I got third place."

Perhaps one of the best aspects of teaching children about speaking is "knowing that we’re equipping the future leaders of our country," says Clark. "These children are our next generation, and this type of training is important for them and our future," he says. And although Clark isn’t running the leadership training programs specifically to increase Toastmasters membership, he notes that many of the students are likely to become members once they are 18.

Tips for Teaching Youth Leadership Of all his accomplishments as a Toastmaster, Ron Clark says he gets much satisfaction teaching speaking skills to youngsters. "Perhaps the best part of showing children how to speak is the look of exhilaration on their faces when they succeed," he says. "They’re so excited when they realize that they did it all by themselves." Here he offers tips for successfully educating young people about presentation skills: