Speaking Up in Tough Situations 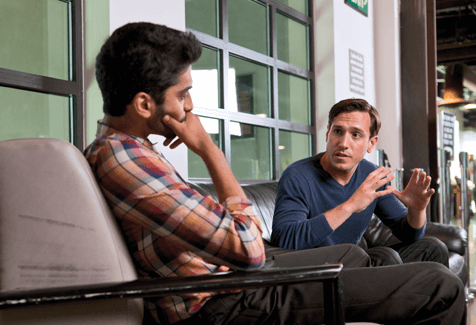 How to find your voice without feeding conflict.

From the Toastmaster magazine October 2015.

Toastmaster Geeta has problems at work. As digital project manager for a well-known fitness brand, she’s put a great deal of effort into developing an online app, of which she’s very proud. But she keeps butting heads with Steve, the marketing director, in meetings.

“He shows up, even when he’s not invited,” says Geeta (not her real name, though this example is loosely based on a real situation). “He even tries to take credit for my work in front of the CEO.”

Email exchanges with Steve devolve into territorial disputes over who’s responsible for what. It’s gone on for months, and Geeta considers asking her boss for a new assignment, just to avoid Steve. There has to be a better way. But what?

Conflicts are a normal part of life. In work, family and politics, disagreements arise. How we resolve these conflicts can have a significant impact on our happiness and self-fulfillment. Com-munication, of course, is the key. But conflict resolution takes more than just a willingness to talk. It requires us to regain perspective, reframe our contributions and rehearse our approach.

When I find myself in tough situations, I often turn to the Harvard Negotiation Project’s classic book Difficult Conversations: How to Discuss What Matters Most. I recently spoke with co-author Douglas Stone by phone. “You don’t have to be Martin Luther King or John F. Kennedy to be good at difficult conversations,” says Stone. He instead cites authenticity, listening and clarity of purpose as critical skills.

Regain Perspective
In conflict, it’s easy to fall prey to all-or-nothing thinking. We assume that if we’re right, the other person must be wrong. We blame and make blanket statements (You always leave the dishes in the sink). Exasperated, we resort to extreme forms of communication.

One of those extremes is escalation, in which we try to impose our will using sarcasm, shouting, appeals to authority, alliance building and similar techniques. The problem with escalation is that it rarely gets us what we want. We may temporarily argue someone into submission, but they’ll resent us for it. Escalation damages relationships.

The other extreme is avoidance, doing nothing but hoping for the best. We choose avoidance when we fear the consequences of speaking up. What if saying something makes matters worse? What if it hurts our relationship or makes me look stupid? The risks seem to outweigh the benefits.

But there’s a cost to avoidance. When we’re silent, we let others think we agree with them even if we don’t. We empower those willing to speak, allowing them to lure sympathetic listeners who never hear our alternative viewpoint. We also deprive speakers of the opportunity to make things right. They may not know how strongly we feel or how their behavior affects us unless we put it in words.

Both escalation and avoidance prevent us from seeing avenues for compromise and understanding. Difficult Conversations says we can regain perspective on conflict with a “learning conversation,” in which we look for common ground and try to understand the other person’s point of view.

In the situation with Geeta, a good first step for her would be to invite Steve to a learning conversation.

One of the easiest mistakes to make in a conflict situation is to assume we know the other person’s intentions. There’s no way of knowing for certain unless they tell us, and even they may be confused about the “why” of their actions. Instead, focus on the impact you’ve experienced, using “I” statements to describe your feelings and observations (just like in a good evaluation). Here’s an example to show how this approach applies to Toastmasters:

Ever since Toastmaster Antonio became vice president membership for his club, he’s received unwanted advice from former club president Ruth. (These aren’t their real names, but the example is rooted in a real situation.) She claims to be helping. “Antonio is new and doesn’t know our traditions,” she says. But Antonio disagrees, and he’s asked the current club president to intervene.

Meanwhile, Ruth feels like every time she speaks, Antonio rolls his eyes and shakes his head. She, too, has spoken to the current president. What could they do differently?

This is ripe for a learning conversation that separates intentions from impact. For instance, Antonio might say, “I don’t know if it’s your intention, but when you send me emails about club tradition, it feels like you’re stepping on my toes. I’d like more space. Can we talk about it?”

If Ruth initiates, she could say, “When I see you roll your eyes, I feel disrespected. I don’t know if that’s your intention or even if you know you’re doing it. But I’m hoping we can talk.”

Even when we try to conceal feelings, they become evident to others through body language.

Reframe Your Part
It’s easy to recognize someone else’s problematic behavior but much harder to see our own. To resolve conflict, we must be willing to examine our own contributions to a conflict. According to Difficult Conversations, every conflict takes place on three levels: facts, feelings and identity.

Facts have to do with the observable actions that give rise to a conflict—in other words, what happened or what was said. This may be in dispute. Feelings are the emotional reactions: anger, frustration, sadness or humiliation. Even when we try to conceal feelings, they become evident to others through body language.

The third and deepest level has to do with self-identity. Am I a good or bad person? Am I lovable or not lovable? Am I competent or incompetent? What will others think of me if I say something now?

Feelings and identity issues make conflict hard to talk about. But self-awareness helps us see what’s important and prevents others from knocking us off balance.

Rehearse Your Message
It’s easy to get flustered in difficult conversations. But rehearsal can help us maintain composure and choose words that represent our thoughts and feelings accurately. “Before you practice,” says Stone, “you want to think about what’s at the heart of this conversation for you. Then practice ways to say it or even write down good words to use.”

Also try to anticipate what the other person might say and how you will respond. Write out a plan: “If Mike continues to make comments about my weight at work, I will say ...” This is what’s known as implementation planning.

Although rehearsal is useful, we don’t always know how the conversation will go. “You have to remind yourself it’s not a presentation, it’s a conversation. A big part of what you’re doing is listening,” says Stone. Be generous in how you listen to someone else, and speak from the heart.

Realistic Expectations
In the end, you must have realistic expectations about what you can achieve in a conversation about a conflict. Your goal may be to get the other person to change, but you can’t control how the person will respond. What you can control is sharing what’s important to you.

For more articles from the October issue, visit www.toastmasters.org/Magazine/Issues.