Seizing an Audience — and Opportunities 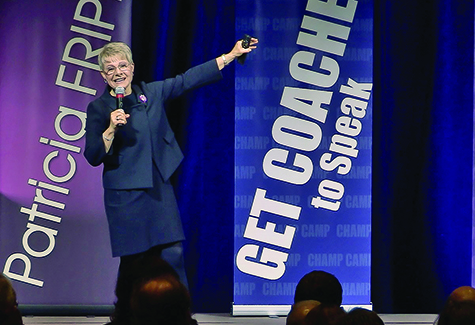 It is a little after 9 a.m. on a Saturday morning, at the 2014 Founder’s District fall conference. About 200 people sit in the audience as the keynote speaker is introduced. Then Patricia Fripp strides to the center of the stage, where for the next 90 minutes she commands the space. Wearing a fashionable navyblue suit, Fripp speaks with purpose and panache, engaging the Southern California crowd with her colorful anecdotes, toughminded advice and lively humor.

The veteran speaker may be small in stature, standing a little over five feet tall, but she is a large presence in any room.

Toward the end of her presentation, she does on-the-spot coaching, inviting audience members to come up onstage and practice the beginning of their speech. (Being Toastmasters, they all have openings at the ready.) One stocky man wearing dress suspenders is among the volunteers. Fripp gets straight to the point—or in this case, the pants: A suspender strap is protruding from his right pocket, so she reaches down and removes it, telling him to put it back over his shoulder. Then she checks his left pocket to make sure it’s clear too.

Clothing worn in the wrong way, loose change that jangles, holding the microphone improperly—all can divert an audience’s focus. “Do not distract from your message before, during or after your speech,” Fripp says.

Her own message today focuses on how to connect with and inspire your audience. Not wanting to limit her reach, Fripp alerts the crowd to social-media possibilities whenever she shares a particularly valuable nugget. “Tweet that!” she says. “Hashtag Fripp.”

Whether tweeting or talking about her, there’s much to say about this longtime trailblazer. Fripp first made a name for herself as a hairstylist. At 20, she landed a job cutting women’s hair at a swank San Francisco hotel, having moved to the city from her native England. She quickly moved up in the business. “In 1969, I became one of the first women to enter a new industry, which was men’s hairstyling,” she says in an interview after her speech.

The charismatic Brit gave presentations at hairstyling events and eventually parlayed her experience into paid speaking gigs. She joined San Francisco’s Cable Car Toastmasters club in the mid-’70s, and in 1977 she delivered the keynote at the Toastmasters International Convention. Then, in 1984, she was selected as the first female president of the National Speakers Association (NSA).

Practice and preparation were keys to her rise in the industry, says Fripp, an NSA Hall of Fame speaker. “You get yourself ready and the opportunities will present themselves, and that’s a universal principle, whether you know it or not.”

A Lady in Las Vegas

For Fripp, the opportunities keep coming. She runs a high-powered speaking and coaching business, and teams up with Toastmasters World Champions of Public Speaking to present an annual conference. Held in Las Vegas, it’s aptly titled “Lady and the Champs.” This year’s program is February 28–March 1, and it’s headlined by Fripp and champions Craig Valentine, Darren LaCroix and Ed Tate.

In keynote speeches and breakout sessions, the conference offers speakers and business people a variety of strategies for improvement. This year, for the first time, it will be streamed live, providing access to those who can’t make it to the desert city.

“There’s an international component to this event because of the world champs,” says Fripp. “Last year at Lady and the Champs, people from 16 different countries attended the event.”

The conference will also feature motivational speakers Tim Gard and Robert Fripp, Patricia’s brother, who happens to be a legendary rock guitarist. He founded the groundbreaking band King Crimson, and in 2003, as his sister proudly notes, he was ranked 42nd on Rolling Stone magazine’s list of the 100 greatest guitarists of all time. In 2011, the magazine honored him once again. “My brother got the brains, and I got the personality,” quips Fripp.

She still delivers speeches around the world, but most of Fripp’s time now is spent coaching. Her clients include executives, speakers, authors and business people looking to improve their sales presentations.

At the November Founder’s District conference, about 20 people line up to get her advice on their speech openings. Her coaching talents are on full display as she listens and makes quick assessments. A common theme is the importance of creating a sense of story—and advancing the story quicker. “You have about 30 seconds to captivate an audience,” stresses Fripp.

Vernon Budinger, CC, an investment manager in Monrovia, California, takes his turn. He begins by touting an investment strategy. A few sentences in, Fripp stops him. Before you sell the economic benefits, she says, you have to establish a connection with the audience—a sense of trust. Then the financial details can follow.

In her presentation, Fripp also emphasizes the need to be specific, exhorting speakers to be as precise as possible in the words and details they choose. Words like stuff and lots are strictly off-limits.

(Unfortunately, I run afoul of the specificity rule shortly after Fripp ends her speech. Talking to her about our interview, I somehow utter stuff—and immediately hear about it. “Don’t use the word stuff!” she scolds while punching me playfully, but hard, in the arm. Point taken.)

Craig Harrison, DTM, has watched Fripp do her onstage mentoring at many Toastmasters events where she has keynoted. “Her speech coaching is masterful,” says Harrison, who helped form a club with Fripp in the late ’90s. “She whispers suggestions in the speaker’s ear and you can see them incorporate her coaching immediately, and the difference is palpable.”

Fripp is full of stories about her evolution as an entrepreneur and speaker. One thing she says was a big help in the beginning: She was a natural talker. When she worked as a hairstylist, many of her customers were business heavyweights from San Francisco’s financial district; Fripp says she used the opportunity to learn from them, asking questions while cutting their hair. How did you flourish in business? What are the most valuable things you learned when starting out? How did you stay on top?

“Everything I learned about business, I learned behind the chair,” notes Fripp, who ran her own salon for many years.

“With both speaking and hairstyling, I did not start either with great talent,” she adds. “I started with a real interest in, and commitment to, becoming good, and I had a personality that was well-suited to both.”

is senior editor, executive and editorial content, for Toastmasters International. Reach him at psterman@toastmasters.org.