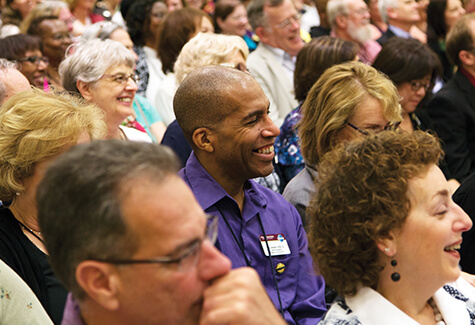 I have been fortunate to win the Humorous Speech Contest twice (for District 11, covering Indiana and northwestern Kentucky) and along the way I’ve learned some important lessons about making audiences laugh. My improvement hasn’t come easy—the journey to becoming an effective humorous speaker is the result of a lot of practice. It’s the direct result of at-tending weekly club meetings, volunteering for speaking roles to test my use of humor, and signing up each year to compete in my club’s Humorous Speech contests. Moreover, it’s the result of continually refining my speeches based on club evaluations.

The following six rules of humor can help you draft your next successful humorous speech.

Find Humor in Everyday Life
I often hear Toastmasters lament how difficult it is to come up with a humorous speech topic. Some of the best speeches are inspired by life’s everyday occurrences. In 2013, my wife and I flew with our two young children to Europe to visit family. The ensuing chaos on the airplane provided me with more than enough material to compose my winning speech that year. Think about your everyday life and things that may have a humorous twist to them.

Know Your Audience
In my 2009 speech, I compared the delivery of my first child to a Toastmasters meeting. This would have made little sense to any audience outside of Toastmasters, but the humorous comparison (using timing cards to help with my wife’s contractions) landed perfectly with my audience. Know your audience—it’s particularly important when trying to land a punchline.

It’s a Humorous Speech Contest: Be Funny!
The best Humorous Contest speeches use humor throughout. Some speakers work up to a big laugh at the end, so their speeches are void of humor in the introduction and body. This approach leaves your audience hanging and wondering When do I get to laugh? I like to launch into a joke right off the bat to get the audience warmed up and to kick start my own energy level.

Use Props
In both of my winning speeches, I used props. In the 2013 district contest, I brought a suitcase to show how, ideally, one should travel with kids inside a bag. I closed the speech by donning a pilot’s cap. Think about effective props that can enhance your humor.

Don’t Step on Your Laughter
One of the greatest challenges a humorous speaker faces, aside from producing laughter, is to avoid stepping on it. It takes practice, but you have to allow your audience the time to laugh and soak in the humor. You can kill a joke entirely by rushing too fast to tell your next one. Effective pauses also enhance jokes. When talking about stuffing my kids into a suitcase, I said, “I see a look of concern on the faces of the audience.” I then took a long pause and concluded with, “I understand your concern, and I realize that the airlines now charge 50 a piece for these bags.” The pause was the key to the joke that generated the biggest laugh in the contest.

Consult with Others
Always run your speech by a mentor or trusted advisor. I have seen several contestants essentially eliminate themselves with humor that crossed the line and was deemed offensive. For the 2013 competition, I debated about whether to use one particular joke that I thought toed the line. I sought the advice of five different people and the consensus was to leave it in. It generated big laughs and I am glad I included it, but seeking consultation about risky jokes is imperative. One of the rea-sons I am a fan of self-deprecating humor is that you only risk offending yourself!

Becoming an effective humorous speaker can provide incredible internal rewards. I can think of three in particular:

There’s nothing as heartwarming as seeing your audience react with smiles and laughter. We live in a world often marred by violence, tragedy and darkness. When you impart humor in a speech and inspire laughter, you as a speaker derive a real reward.

Public speaking in general requires courage, but delivering humorous speeches in particular demands real fortitude. Stepping onto a stage with the goal of making an audience of strangers laugh can be daunting. But taking on that challenge and producing gut-busting laughter in an audience can be one of the great thrills in the Toastmasters experience.

While delivery, timing and body language are critical to telling a joke, the joke’s success lies in the author’s ability to conceive it. Writing an original, clean joke that will deliver a punch takes time and patience, and hones one’s creativity. To make humor work, the speaker must also properly place the joke within the speech, build appropriate context around it and structure the speech effectively. The reward is the development of one’s speechwriting skills.

Mark Twain once said, “Humor is mankind’s greatest blessing.” It’s not often easy to pull off, but a well-constructed, funny speech will bring lots of laughs to the audience and many rewards to the speaker.

A version of this article appeared in the June 2015 issue of the Toastmaster magazine.

is a member of the Indy Free Speakers Toastmasters club in Indianapolis, Indiana.