Leading with Love: A Corporate Formula For Success 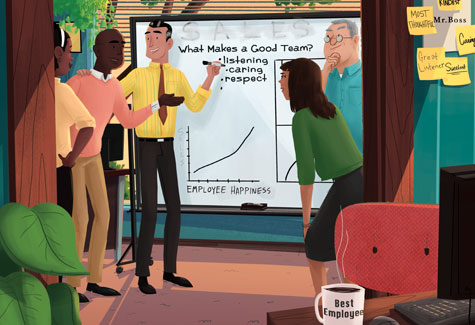 “Leadership would be easy if it weren’t for people,” wrote Mac Anderson, founder of Successories and Simple Truths, two businesses that produce inspirational and motivational products and books.

You may think that leadership is about you, your skills and your experience, but leadership is really about others—all the people you deal with in business, in your community and even in your family. Without people, leadership is a one-size-fits-all skill.

Those who incorporate love into their leadership style are attracting attention. These successful business leaders are creating work cultures that value individuals as team members—not as assets or liabilities.

Corporations are shifting the focus from profit-driven bottom lines to collaborative environments that support, encourage and empower employees to grow and develop, both personally and professionally. The “love of power” is transforming into the “power of love.”

Joel Manby, CEO of Herschend Family Entertainment (HFE), takes love seriously. He leads the largest family-owned theme park organization in the United States—it’s the ninth largest in the world. For Manby, love is a verb, and it works inside and outside the workplace.

His 2010 appearance on the first season of CBS’ Undercover Boss allowed millions of viewers to see HFE’s leadership model in action. Manby went undercover to the frontlines of his company, working side-by-side with his employees giving “Ride the Duck” tours, participating in early morning park clean-ups and other duties performed at the park. Along the way, he encountered employees who were down on their luck. He became motivated to do more for them.

At the end of the episode, Manby gave back to alleviate the hardships of those employees he had met. The response to the show was overwhelming—it inspired Manby to write Love Works: The Seven Principles. In it, he explains the principles that guide his life and career. He believes leaders can be successful and care about employees by implementing patience, kindness, trust, unselfishness, truthfulness, forgiveness and dedication in their interactions with coworkers.

Manby says, “HFE trains our leaders to love each other, knowing that if they create enthusiasm with their employees, the employees will in turn create an enthusiastic guest experience.”

John Mackey is co-founder and co-CEO of Whole Foods Markets, a natural and organic food market that supports environmental stewardship. Fortune Magazine named Whole Foods one of the 100 Best Companies to Work For in 2014—a distinction the company has held for 17 consecutive years.

In an interview with American media host Oprah Winfrey, Mackey described the company’s mission: To sell healthy food, make a living and have fun. He advises following your heart when choosing a career. Mackey shared his story about how he dropped out of college, learned to cook and moved to a vegetarian co-op in Austin, Texas. It awakened his food consciousness and became his passion.

He and his then-girlfriend borrowed and raised a total of 35,000 to open SaferWay, a market and health food restaurant. After two years, SaferWay merged with Clarksville Natural Grocery and reopened as the first Whole Foods. Mackey now leads a corporation of 380 stores with 80,000 employees known as team members.

Mackey says leaders have a responsibility to develop their own consciousness. For him, love means being a good steward of all resources, including employees, investors, suppliers and customers.

Whole Foods extends its practice of leading with love to the earth through sustainable practices.

Since 1948, Kimray has manufactured equipment for the oil and gas industry worldwide. Tom Hill, CEO and chairman of the board, takes a personal interest in the lives, aspirations, families and wellbeing of his employees.

“I’ve learned through the years that every person is living a story,” says Hill. “I may not know all that is going on in their lives, so I need to treat them with grace, patience and understanding instead of assuming everything is okay.”

During an economic downturn, Kimray chose not to lay off its employees. Instead, the company “loaned” its employees out to charitable and civic organizations while continuing to pay their salaries. When the downturn reversed, the company brought them back “home” to work, and did not have to retrain them—a win-win solution.

In another instance, when Kimray’s management realized how some poor decisions adversely affected the company, they developed a program, “Character First.” Designed for all employees, the program encourages a culture of good character—the inward motivation to do what is right. Kimray’s program has now been implemented in businesses, school districts and communities throughout the U.S. and in 28 countries.

Hill says, “One benefit of developing a culture of character and leading with love is that it makes Kimray an attractive place to work. We retain good people because they enjoy working here,” says Hill. “We also attract new employees who want to work in a safe, positive and healthy environment, which allows us to have a positive impact on our employees beyond their jobs—to their families and community.”

From global to local, these new types of leaders can be found in large corporations as diverse as manufacturing and agriculture to small, family-owned businesses.

Paul Freeman is owner and CEO of Anchor D Bank, with branches in three rural communities in western Oklahoma. He admits it’s easy to get caught up in productivity, spreadsheets and profitability models, but, “While those are tools,” he says, “there must be a balance between bottom-line thinking and doing the right thing—not only for our customers but also for the employee and the employer.”

Freeman measures that in customer satisfaction with the company’s products and services. He asks questions like: Are our customers going to have a better day because of their visit to the bank? Are they smiling when they walk out?

He says that goes for employees also. Freeman’s bank model is having happy employees because it “transfers to the level of service they provide our customers.” Anchor D works with employees to develop each one’s career path within the bank.

Employees’ personal concerns are also addressed. When Anchor D recognized the stress its employees were under due to their financial inability to provide their children an adequate education, the bank implemented a tuition program to cover post-high school education expenses.

Anchor D leaders experienced an “aha” moment when they realized their goals should not be based on numbers, but instead should focus on the direction they take, and the culture they create, to determine the company’s outcomes.

Freeman says, “If we spend the money to create the best environment, training and culture we can … the rest will come. It’s all about doing the right thing.”

The stories behind successful leaders reveal core values that are communicated to employees, both in policies and procedures.

Leading with love does not require a large investment of dollars or resources, but it does require taking a personal interest in the words, ideas and lives of individuals, and appreciating how a company’s success depends on the efforts of all.

And you don’t have to be the CEO of a corporation—although you may be some day—to lead with love.

For example, Demetrius Office, a member of Enid Speakers of the Plains Toastmasters club, in Enid, Oklahoma, started a young men’s basketball group about five years ago to help the players make positive decisions and action plans to improve their lives. He established trust and open communication between the group’s members, but, just when they were beginning to feel confident in the environment, a new member joined and disrupted the group’s unity.

“I knew I needed to strengthen my interpersonal skills to help this individual,” Office says. “That’s when I found Toastmasters.”

Office credits Toastmasters with giving him skills to reestablish trust within the basketball group and lead the members to create goals and a vision for the future. “With the help of my Toastmasters family, I learned to communicate in a way that I could speak from my heart.”

Leading with love offers a formula for success that goes beyond a profitable bottom line and a checklist of achieved goals. Leading with love makes a greater, longer-lasting contribution to the world by impacting, improving and inspiring lives.

Linda Allen, ACS, CL, is a member of the Enid Speakers of the Plains Toastmasters in Enid, Oklahoma. She is a writer, speaker and trainer specializing in cultural awareness, professional and personal development, and leadership.