How to Be a Ruthless Editor 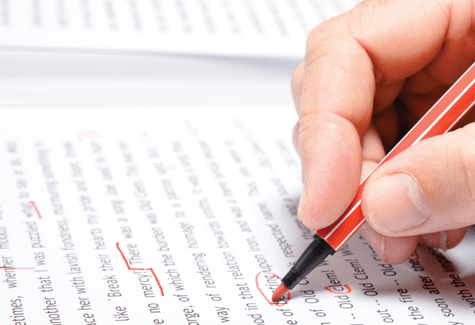 Pack more punch in your speeches by pruning your prose.

From the Toastmaster magazine December 2015.

There are few situations in life in which being ruthless is a virtue. Editing your own speeches is one of them.

It’s natural for all of us who write to want to preserve every word of the “final” draft we’ve labored over, carefully crafted and lovingly nurtured into existence. Each clever phrase, sparkling anecdote and colorful adjective seems precious. How could we consider cutting even a single word of all that sheer brilliance?

But cut we must, if we care about our audience and want to communicate effectively. As one famous author put it, “In writing, you must kill all your darlings.”

Using one of my own Toastmasters projects as an example, I’d like to share steps you can follow to edit your own speeches more effectively. I call it the P-R-U-N-E method. Each letter stands for a potentially problematic type of content you’ll want to consider cutting: Platitudes, Redundancy, Unnecessary words, Needless complication and Excursions.

When you prune, you remove branches from a tree or bush to improve its shape or growth. Even living branches, bursting with greenery and flowers, may have to be thinned out for the greater good. Likewise, pruning away certain elements from your speech, even if they seem perfectly fine in their own right, may help the overall speech and allow it to come alive and blossom.

I recently gave a Toastmasters speech about body language across cultures. I focused on hand gestures that mean different things in different regions of the world. As I wrote the speech, I realized I had almost nine minutes of content for a five- to seven-minute talk.

Yes, it’s possible to request more time, but generally it’s best to fit your material into the prescribed length. That alone is one reason to prune your speech. But even more important, a vigorous edit will make your speech tighter, clearer, smoother and more impactful.

A vigorous edit will make your speech tighter, clearer, smoother and more impactful.

Here’s what to look for as you prune:
Platitudes—These are trite, insipid statements. They will bore your audience. In my speech, for example, what if I had opened with the painfully obvious observation that “we live in a multicultural world”? Or what about this jaw-dropping revelation: “Poor communication can produce unintended results.” Can you just hear the yawns?

Banish stale, tired, uninspired lines from your speaking or writing. Take no prisoners. Instead, aim to use fresh, vivid, concrete language that will make your listeners sit up and take notice. I included this line in my talk: “Welcome to the wild, wacky world of cross-cultural communication, where the wrong hand gesture can insult your host, spoil a potential business idea or perhaps even start a war.” In short, strive to use colorful, punchy prose in place of platitudes.

Redundancy—A speaker may repeat certain elements for emphasis or effect. That’s not redundancy. Here, I’m talking about superfluous repetition. After you’ve made a point, there’s no need to keep hammering it. In my speech, I wanted to share examples of faux pas by U.S. political leaders. I found three good stories: one about Richard Nixon when he was vice president, another about former President George W. Bush during his second inauguration, and a third about former Vice President Walter Mondale and a speech he gave before the Japanese Parliament. Each story was juicy and relevant, but they all illustrated the same point about world leaders and their gaffes. So I decided two anecdotes were enough, and I axed the Mondale story. It would have been overkill.

Needless complication—I once got some excellent advice from the founder of our club, Allan Kaufman, DTM. I had prepared a Table Topics activity for our next meeting and previewed it with him. It was a tad involved. He suggested I come up with something simpler. “People are tired,” he said. “They’ve been working all day. They don’t want to have to think that hard.” I began to apply this idea across the board; in my speeches, too, I saw how it was best to avoid complicated ideas.

In preparing my speech on body language, I came across seminal research by psychologist Paul Ekman showing how people from different cultures interpret facial expressions. He had found wide agreement across cultures, with a few minor differences. Rather than go into all the details and nuances of the findings, I boiled it all down to a simple idea: “Research has shown that facial expressions, unlike hand gestures, basically mean the same thing to people around the world.” Then I moved on to my next point. I extracted only the essential idea I wanted to convey.

In your speech, find ways to simplify, summarize and streamline. In a five- to seven-minute speech, your listeners don’t need—and can’t process—all the fine points. Delving into complicated details will lead your listeners to tune out.

Excursions—These are tangents and digressions. Project 2 in the Competent Communication manual, “Organize Your Speech,” tells us “most listeners will remember only three to five main facts or ideas. For a five- to seven-minute talk, three facts or ideas are plenty.” Every sentence in your speech should support and advance these ideas and their subpoints. Stories, statistics, examples, explanations—all of it should help your audience grasp and remember your main ideas. Any element that does not serve this cause should be cut, even if it’s interesting and colorful in its own right. Save it for another speech. Otherwise, you risk diluting your focus and lessening the impact of your main ideas.

In my talk, I could have gone on several tangents that were part of my overall topic but outside the scope of my main ideas. I did devote a sentence to acknowledging other aspects of body language I didn’t focus on—eye contact, for example, or how close we stand to the other person—but only as a transition to my conclusion.

In the end, the speech I gave, if I may say so myself, was “lean and mean.” It got the point across in a clear, concise, lively way. It kept people’s attention. There were a few things I wish I had done better (like delivering my closing line more smoothly), but that’s why I attend Toastmasters.

As you get set to write your next speech, prepare to prune away. And be aggressive (even ruthless, I daresay) when needed. Good pruning makes for lovely lilacs—and crisp communication.

is a member and past president of Randallstown Network Toastmasters in Baltimore, Maryland. He works as a communicator for the research program of the United States Department of Veterans Affairs.