From Tragedy to Triumph

Burn victim inspires others with his music and speeches. 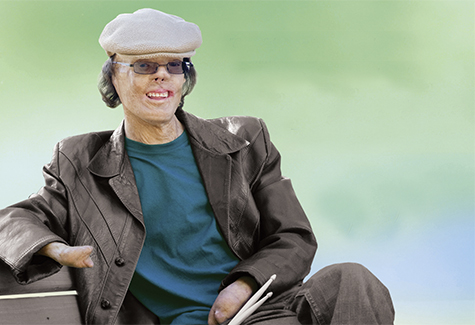 Talk to Dan Caro about his life and he’ll tell you that things are just as they should be. The motivational speaker and professional drummer suffered a devastating childhood accident but says, "There are no negatives in life."

A former Toastmaster, Caro is the author of The Gift of Fire: How I Made Adversity Work for Me. He says, "I believe in owning your life and being 100 percent accountable for your actions and reactions. I’ve come to terms with my history and realized that everything happens for a reason."

When Caro was 2 years old and playing near a water heater, a gas can fell over, igniting a 2,500-degree fireball that engulfed him. His tiny body became so hot that once he arrived at the hospital, doctors had to cut him with a scalpel to release trapped heat. During those first tentative hours, he died three times. Eighty percent of his body received third- and fourth-degree burns, which meant extensive loss of skin, including on his face. He also lost his fingers and most of his hands.

As a child, Caro spent more than four years in the hospital undergoing 80 grafting and reconstruction surgeries. Much of that time was spent in isolation rooms because his thin skin made him susceptible to staph infections. It was during this period that Caro discovered how people truly treat one another and where they place their values.

"All of that self-reflection set me on a path to discovering my dharma, which is my life’s purpose," says Caro. "I’ve always felt compelled to excel so that I can inspire people to live their lives to the fullest without complaint or excuse."

During childhood when other kids were fretting over skinned knees and homework assignments, Caro struggled to achieve tasks that many take for granted, such as tying his shoelaces.

"I attended a private school from preschool through eighth grade, and initially the kids made fun of me until one day when I chased after the class bully and overpowered him," he says. "From that day on, I was friends with everyone."

With no fingers or even hands, Caro’s seven-year struggle to tie his shoelaces wasn’t as quickly overcome, but the experience taught him a wealth of other great skills, including patience and persistence. "Though I lacked the dexterity to grip the shoelaces, I tried every day until I finally tied them," he says. "I can only explain it as a spiritual energy. On that particular day, things clicked and I suddenly had a new-found strength. I believed so strongly that I could tie my shoes that my intentions led to the manifestation of the goal."

After succeeding with his shoelaces, Caro decided to tackle the drums. "I have a functional thumb on my left hand, but not on my right one, so it’s hard to grip anything, such as a drumstick," he says. "After a few unsuccessful attempts that included painful things like glue, my dad called a drummer friend and he suggested wrist bands, which I supplemented with rubber bands, creating fully functioning hands."

Caro began playing the drums at age 12 and found steady work for many years throughout his hometown of New Orleans, Louisiana. At one time he was the primary drummer for 11 jazz bands.

"Dan is a remarkable drummer, which is especially impressive when you consider his situation," says Stanton Moore, a professional drummer in New Orleans who has known Caro for several years. "I’ve seen Dan power through a gig with such determination, and he does it all with a smile. He is one of the most inspirational people I’ve ever met. Whenever I think my life is tough, I just look at him and realize that I have no excuses."

It was Hurricane Katrina in August 2005 that prompted Caro to change his career path from drumming to professional speaking and writing. "Katrina taught me to not ground yourself with a location or get attached to your stuff, because it can all go away suddenly. I realized that who you are and what you have inside of you – your consciousness – is all that really matters."

Caro’s speaking career actually started two years before, in 2003, when his father suggested he attend a Toastmasters meeting. "Back then if someone asked me a question, I would freeze up and had difficulty expressing myself," says Caro. "Going to Toastmasters was one of the best decisions I’ve ever made. The organization gave me the tools and confidence to do what I’m doing now."

He quickly earned his Competent Communicator award and became president of his club, Totally Toastmasters in Mandeville, Louisiana, bringing it back to Distinguished status by his second year. Today Caro is a sought-after speaker and author who regularly presents to audiences numbering in the thousands.

Steve Siebold is a professional speaker who met Caro at a speech workshop several years ago and became Caro’s coach. "Dan’s message was unbelievably compelling and inspirational; he just needed some refinement in how he shared it," says Siebold, who speaks on the topic of mental strength. "Considering his heart-wrenching story, there is the challenge of the audience feeling emotionally drained after hearing it. But Dan connects with the audience and shares the wisdom he acquired because of his tragedy, convincing listeners that they too can succeed, no matter the odds. He makes the presentation even more uplifting by playing the drums."

While Siebold helped Caro develop his speaking skills, he has learned a great deal from Caro in return. "Dan is never really out of my mind as I go about my life," he says. "When I compare my challenges to his, I just laugh."

Toastmasters Past International President Bennie Bough, DTM, agrees. "As a burn victim, Dan electrifies his audience with his message and demonstrates that being handicapped is not an obstacle," says Bough. "He captivates your heart and inspires you to higher levels of success."

Today Caro is busy speaking and writing. His current mentor is Wayne Dyer, who wrote the for- ward for Caro’s newly released book, The Gift of Fire. While he doesn’t play the drums professionally anymore, Caro still enjoys music and has started composing. He is also a spokesperson for Shriners International, a philanthropic organization that supports Shriners Hospitals, an international health care system of 22 hospitals that – specializes in treating children free of charge for burns, orthopedic– conditions, spinal-cord injuries and cleft lip and palate. "It was at Shriners Hospitals that I had my 80 surgeries, and I feel it’s my duty to give back to the organization that saved my life," he says.

Caro plans to continue sharing his message of determination, strength and hope. "I have come to realize that people looked at me differently throughout different periods of my life because of how I looked at myself. I don’t get many weird looks anymore, and I think it’s because when you change the way you look at things, the things you look at change. When you live with no judgments or terms or conditions, things manifest the way you want them to – with no negatives."