From Free to Fee! 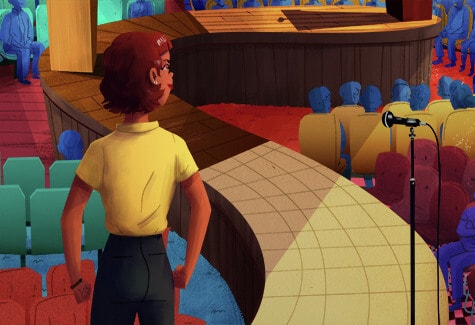 In professional speaking it’s said that “success leaves footprints.” Over the decades, thousands of Toastmasters have migrated into the professional ranks to earn a living as a speaker, trainer, facilitator, consultant or coach, or a blend of these occupations. Toastmasters World Champions of Public Speaking as far back as Cavett Robert (1942), the founder of the National Speakers Association, have made this journey, as have other Toastmasters, and you can too.

Yet to succeed in this arena, many lessons must be learned, as the assembled Toastmasters voices in this article can attest.

Dananjaya Hettiarachchi: Expert In His Domain
Dananjaya Hettiarachchi, winner of the 2014 World Championship of Public Speaking, says he knew that winning the competition wouldn’t be an automatic ticket to being a professional speaker. He had to have expertise in his subject area. Hettiarachchi, CTM, is a human resources specialist who has MBA degrees in both marketing and management.

“Find your niche and become an expert in your domain!” he advises those who want to pursue a professional speaking career.

Yet finding your niche isn’t enough. “You need to be seen and be heard,” Hettiarachchi says. He suggests aggressively seeking opportunities to speak for a fee, or for free, as he did for a year: at conferences, conventions, local meetings and special events.

“Collect references and testimonials, and build evidence of your impact” as a speaker, he says. The first native of Sri Lanka to win the Toastmasters World Championship, he offers another piece of advice: Understand how adults learn best—it gives you insight as a speaker.

Hettiarachchi invested heavily in learning by taking courses, studying the psychology of how content is structured and understood by an audience, and dissecting the brilliance of Toastmasters’ 1994 Golden Gavel winner Les Brown’s speechcraft, as well as studying other great speakers.

He has also stressed the importance of learning from mentors, heaping praise upon his own mentor: Balraj Arunasalam, DTM, Toastmasters’ 2014–2015 Second Vice President.

Rory Vaden: Expand Your Options
Rory Vaden is living proof that sales experience, drive and problem-solving skills are highly valued in the business world. “Being paid as a professional speaker is much more a reflection of your expertise than your skill at speaking,” says Vaden, runner-up in the Toastmasters 2007 World Championship of Public Speaking.

Vaden, a professional speaker, entrepreneur and author, advises aspiring pro speakers to adjust their perspectives on how to make money as a speaker.

“Shift away from the idea of ‘I get paid a fee to come stand onstage,’” he says. It’s more competitive than ever to survive on that check alone. As Vaden notes, you can expand that idea to include other options such as speaking for free and then selling your product at the back of the room, creating training videos and promoting them online, or becoming a trainer.

“The number one way you can get hired to speak is to be seen speaking,” says Vaden. “It’s not because you are a World Champion, have great looks or a TV show. It’s because a decision-maker saw you speak.”

So get out there and speak! Vaden, a resident of Nashville, Tennessee, urges speakers to master their material. If you have clients, focus on their needs, not your own, he stresses. The co-founder of Southwestern Consulting, Vaden coaches speakers extensively on making this transition.

Marquesa Pettway: Become a Speakerpreneur
For Distinguished Toastmaster and Certified Speaking Professional Marquesa Pettway of New York City, the path to professional speaking has been filled with teach-able moments. In five short years she achieved these notable titles from Toastmasters and the National Speakers Association. In the process, she learned a great deal.

“It is easy to get into the speaking business. But it’s very hard to stay in it full time,” says Pettway. “To do so, speakers must be speakerpreneurs!” She coined this term to describe how speakers must gain entrepreneurial skills not necessarily taught in the corporate world.

Early on, Pettway paid her dues by joining a seminar company. She didn’t focus on the money she was earning (“99 cents an hour!”) traveling from town to town, but appreciated the experience of speaking daily, learning to sell other peoples’ products in the back of the room and building her confidence.

As her speaking business grew, so did her savvy. She “picked a lane” and became an expert. “Being an expert means that you can solve a problem for people, whether it is helping them find the love of their lives or lose weight or become healthier. You’ve got to be an expert in at least one category to get hired.”

But there’s so much more to mas-ter. “Speakerpreneurs” can position themselves effectively in the market-place—partly through social media. After delivering value to an audience with their speech, they are comfortable making an offer from the platform to sell coaching services, products, retreats, boot camps or other packages. It’s an art form, and it takes practice. Mostly, says Pettway, “You have to have a mindset of it being a busi-ness and not just about giving speeches.”

Mark Hunter: Make Your Mark in the Big Game
For 2009 World Champion of Public Speaking Mark Hunter, credibility and authenticity are keys to success in the professional ranks. Credibility, he says, is both per-sonal and perceived. Personal credibility means ensuring that you have standing in the topics you choose—solid expertise and knowledge in the area you speak about—while perceived credibility is “how audience members see you.”

“Protect your personal credibility—it’s in your control!” says Hunter, a Distinguished Toastmaster. Have an honest conversation with yourself and those who know you best regarding your primary values. This helps you define and protect your credibility.

A resident of Helensvale, Queensland, Australia, Hunter describes authenticity as “the harmony between what is seen by the audience and who we are.” In other words, be yourself and be real. He’s seen speakers portray one persona onstage, and another offstage. Audiences detect this contradiction.

Hunter, a trainer and coach who helps organizations improve the speaking skills of their employees, says another vital step in launching a speaking career is to keep learning. He says he has actively sought feedback, learned from his mistakes, and watched other speakers to affirm or challenge what he does and how he does it. “I am both a lifelong learner and a reflective learner,” says Hunter.

Allison M. Shapira: Leading Through Speaking
For Allison M. Shapira, ACS, ALS, leveraging the communication and leadership skills she developed in Toastmasters was natural. The founder and president of Global Public Speaking in Washington D.C., she coaches clients in professional speaking. Being a paid coach, says Shapira, requires passion and purpose. Her advice for finding clients: “Dive in with a relentlessness of purpose! Have courage and a belief in what you are doing and the importance of the skills you teach.

“Sell the value you bring to others and the benefits that accrue to them through working with you,” she adds.

Shapira’s path to coaching speakers has been a fascinating and diverse one, showing that there is no one right path to take. As a college student, she was a vocal performance major—planning for a professional career as an opera singer—but then switched her major to Italian literature. After graduation, Shapira landed a job at the Israeli consulate in Boston and was expected to give speeches on the consulate’s behalf. Thus, she joined Boston University’s Toastmasters club.

Her Toastmasters training has been invaluable, says Shapira, adding that her experience with music, language and diplomacy has contributed to her coaching career as well. It’s all about helping people find their voice, she says.

A version of this article appeared in the August 2015 issue of the Toastmaster magazine.

is a professional speaker, a Certified Virtual Presenter, and a charter member of Silicon Valley ImprovMasters in San Jose, California. Visit www.ExpressionsOfExcellence.com for more information.