How classic debate helps you develop confidence and a personal speaking style. 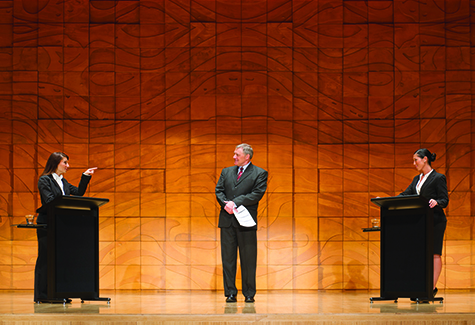 People most often associate debate with politics, such as the verbal commotion on the floor of the British House of Commons or the miasma of cross-talk, denials and interruptions that define televised debates between American presidential candidates.

But consider the classic debate style, as when a high school student—sometimes in a nearly empty classroom—presents a brief but strongly referenced argument in favor of a topic like rehabilitation rather than retribution in the criminal justice system. Minutes later, without fanfare, another student refutes that argument and methodically lays the foundation for an opposite point of view.

All three of these scenarios are recognized as debates. We’re likely more familiar with the first two, which are more public, more histrionic and less focused; this is speech designed not just to persuade, but to produce visceral reactions, even inflame passions.

However, it is only in the third scenario—the classic academic debate—in which arguments rise or fall solely on the weight of evidence and the logic and organization of a presentation rather than on rhetorical flair or showmanship. And, because scores are kept, there are always identifiable winners and losers.

For anyone more accustomed to the heated rhetoric of talking heads on panel shows, or to the hammer-blow bombast of sound bites or the whizzed up back-and-forth of campaign talk, classic debate can be rarified air, indeed.

“The debates you see on TV are more showmanship,” says Roberta Hyland, second vice president of the National Catholic Forensics League, an organization that runs local and national debate tournaments for high school students throughout the United States. “The structure of an academic debate normally has a single topic, and involves more back-and-forth. There’s going to be more point-counterpoint extension of a particular thought. The way we refer to [academic debate] is that there’s going to be more clash, and it’s going to be substantive clash.”

If that sounds unusually belligerent for an academic contest, the participants don’t look at it that way, Hyland says. “Clash doesn’t have the emotional ramifications you might associate with the word,” she says. “It’s more of the fact that the ideas being expressed should conflict. It’s the clash of ideas, not emotions. And, of course, the debate is very structured.”

While debate students learn how to develop a convincing argument, they also develop and improve their speaking styles.

Debate styles are developed through the mastery of the tone and volume of the speaker’s voice, and the rate of his or her speech. You can develop your own speaking style by practicing debate formally in your club (consult the Toastmasters Debate Handbook: A Guide to Competitive Speaking (item 104) for more information). Have members take turns debating both sides of an argument. They will learn that whichever side of the topic they argue, the point is not as much about which side they take, but how they are able to support their arguments logically. Master delivery through debate and you too can speak confidently, logically and persuasively about any topic.

Public policy debate: This is the oldest and likely best-known form of debate practiced at both the high school and college levels. A single topic is debated all year. For example, the U.S. public policy debate topic for 2013-2014 is “Resolved: The United States federal government should substantially increase its economic engagement toward Cuba, Mexico or Venezuela.”

Two students form each team. One team (the affirmative side) argues in favor of a previously selected proposition while the other team (the negative side) argues against it. The debate features four constructive speeches and four rebuttal speeches. The team with the strongest evidence and most organized presentation wins.

Lincoln-Douglas debate: The inspiration for this format was provided by the famous debates between American senatorial candidates Abraham Lincoln and Stephen Douglas in the 1850s. In the Lincoln-Douglas format, one person takes the affirmative side of the argument and one person takes the negative side. The debate consists of five speeches with periods of cross-examination, and propositions that are usually value-related. Topics change every two months.

“In this type of debate you see lots of ‘ought’ terminology,” says Hyland. “That implies some sort of question about morality or correctness, either in the affirmative or the negative.”

Other formats, such as public forum and parliamentary debate, allow for more informal and persuasive speech, as well as the ability of debaters to think quickly on their feet.

Preparing a Case
Each debate format “involves its own type of preparation, stylistically,” says Hyland. “You don’t only prepare the affirmative; you still have to prepare a case for the negative position, to understand and argue both sides of the argument. It makes you more knowledgeable but also gives you a better understanding of the counter opinion, because you can’t be so firmly entrenched in your own world view. You can’t be a successful debater unless you can debate both sides of a topic.”

Additional vital characteristics are common to all forms of competitive academicdebate: structure, research, reliance on hard and persuasive evidence, and calm courtesy. Paint outside those lines and you lose points.

“In a formal debate, both sides are expected to be courteous, professional and calm,” says Dr. Susan Ohmer, director of debate at the University of Notre Dame. “They win through persuasive arguments—through reasoning, through credibility—not through any power move. In fact, if someone were to raise his voice or sound shrill or make a personal attack or say, ‘You’re lying’ or ‘That’s just not true,’ that would not be appropriate in a formal debate because that’s not refuting an opponent’s argument with reasoning. They may not get called on it by the moderator, but they would lose significant points for that. You win and lose points on the strength of your argument.”

In public political debates, such strictures and niceties have become bincreasingly rare. That’s not to say that political-debate opponents may not have experience in academic debate. Members of the British House of Commons, for example “may come from a long debating tradition, such as the Oxford Union,” says Ohmer. And if legislators have been btrained as lawyers, academic debate may balso have been a part of that training.

Gordon Stables, director of debate and forensics at the Annenberg School for Communication and Journalism at the University of Southern California (USC), says academic debaters are in it for the long haul. “The first difference I point out [to students],” he says, “is the number of debates [a student must do]. It doesn’t seem like a really important distinction, but part of being a high school or college student in debate is that you agree to debate a number of competitors a number of times. In a gubernatorial debate, typically there are two, in a presidential debate three. But in a single weekend, the average high school or college student will debate six to 14 times. That’s a huge difference right off the bat.

“You’re going to explore multiple sides of an issue and you’ll debate folks with different perspectives. When you compare public policy to electoral debates, the goal is to make it as precise “Debate is one of those things that definitely has rewards no matter what you want to do with the rest of your life.” — debate expert Roberta Hyland TOASTMASTER | JUNE 2014 19 as possible, to debate a very narrow range of issues that you’ve agreed on in advance. So the difference between one debate and a number of debates has a lot of implications.”

For students new to academic debate, the lack of the kind of fireworks that might be seen in the House of Commons— indeed, possibly the lack of even an audience—can be surprising, says Stables. And there is one quality they must learn to embrace quickly: empathy.

“There’s no other place in our lives where we have the space to think outside of ourselves and be creative in that way,” says Stables. “Debate is a great way to reduce polarization because it allows us to understand where other people are coming from.”

Argumentation may be natural to some people, but debate can be taught. What’s needed of beginners, says Stables, is “a willingness to have their voices heard. A degree of courage and a willingness to start is the first thing. If students are willing to engage their voices and share that with others, there’s a lot that teachers and coaches can do to help that student become more comfortable.”

“Debate,” says Hyland, “is one of those things that definitely has rewards no matter what you want to do with the rest of your life. You learn how to take a question and learn more about it—educate yourself about it. You’re obviously learning how to write and make compelling arguments and understand what it means to be persuasive. You are also gaining that comfort level in communicating with others and speaking in public.”

And the path from rookie to confident advocate need not be a long one, says Ohmer, whose voice rises a bit with enthusiasm when she recalls summer debate classes she taught for high school students. “They went from never having debated to full-fledged competitive debaters in two weeks,” she says. “I am a passionate believer in debate for high school students. It develops the very skills they’ll need for college.”

is a Southern California based writer and regular contributor to the Toastmaster magazine.