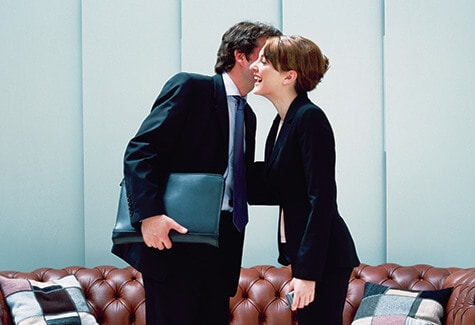 Before you step up to the microphone in Dubai, Düsseldorf or New Delhi, consider which behaviors and topics can be construed as rude, controversial or even illegal in your host country. Your goal, from the moment you are introduced, is to establish credibility and progressively build it throughout your presentation.

Since intercultural communication issues vary greatly around the world, here are several tips to help you avoid some of the most egregious errors from the outset of your visit.

1. Read their lips. A kiss is not just a kiss.
Because Kiss, Bow, or Shake Hands is part of the title in a series of my books, I am sometimes the recipient of a kiss from the person who introduces me. They use the book title almost like an icebreaker; it gives them a perfect entrée for a warm greeting.

Les bises, un beso or un bacio often occurs in France, Spain, Italy and much of Latin America as well. But in other regions of the world, I am exceedingly careful about touching my hosts. Even an air kiss can cross over from being merely awkward to alarming.

Avoid making the same mistake Richard Gere made at an AIDS benefit in Mumbai several years ago. He dramatically “dipped” and kissed an Indian starlet named Shilpa Shetty on her cheek. It was a typical theatrical gesture that would have played well in Hollywood, but some Hindus were highly insulted. Protests erupted, arrest warrants were issued, and both were hung in effigy.

Many cultures disapprove of public displays of affection between genders for religious or traditional reasons. These include:

India, Pakistan, Thailand, Myanmar (formerly Burma) and other primarily Hindu or Buddhist countries
In these cultures, executives may shake hands or greet each other with a namaste or a wai. Both gestures involve placing one’s hands in a praying position, and raising them to the proper height in front of the face or head.

Theocracies like Saudi Arabia, Qatar, the United Arab Emirates, Oman and Israel
In a theocracy, God tells you what to do. Both observant Muslims and Orthodox Jews are prohibited from touching the opposite sex in public.

China, Japan, South Korea, Malaysia, Singapore and other parts of Asia
Although multiple Chinese presidents have received hugs from exuberant Westerners, your best bet is to offer a brief bow of the head and a reasonable (not heart-stopping) handshake. In the United States, a firm grip has long been an indicator of strength of character, but in much of Asia, a gentle, extended grip is normal and doesn’t reflect negotiating strength. Follow your host’s lead.

Germany, Austria, Finland, Switzerland and the Netherlands
These countries consider business a serious endeavor and view humor or physical affection as a frivolous waste of time at work. This may explain why at a G8 summit in 2006, the Chancellor of Germany, Angela Merkel, reflexively shrugged off former President George W. Bush when he attempted to give her shoulders a little massage.

2. Stand up straight, chest out, head up, hands at your sides.
Many nationalities are known for their excellent posture (e.g., Germans, French, Japanese), but a straight back is not the only criteria for a good greeting.

When Bill Gates went to South Korea in 2013, it wasn’t just his posture and open jacket that made headlines all over the country. Gates has a habit of leaving his left hand in his pocket when he shakes hands. That may fly in Seattle, but unfortunately, it looked disrespectful when he shook hands with South Korean President Park Geun-hye. The headlines blared: “An open jacket with hand in pocket? Way too casual!”

And Secretary General Chung Jin-suk of the National Assembly of the Republic of Korea stated, “It was very regretful.”

3. Use formal titles and last names, and know the correct usage of tu, du, san and sensei.
Names represent much more than a moniker in many countries. They are a link to an individual’s personal history: parents, grandparents or even the town where he or she was born. Therefore mispronouncing a name is more significant in certain countries, particularly when the name is actually a patronymic—a name that incorporates your father’s name.

This tradition is more widespread than you might think. Many languages—from Arabic to Swedish to Spanish—integrate parents’ names into their progenies’. If you cannot pronounce a name correctly, you not only insult the person in front of you but his or her ancestors as well.

Of course, you should be careful about more than just pronunciation.

Formal situations present their own challenges. Let’s say that your first presentation is in Germany. Your host, the Geschäftsführer (CEO or executive director), Dr. Ernst Kohler, formally introduces you to a roomful of eminent guests. In response, you graciously state: “Thank you very much, Ernst, for that kind introduction. It is an honor and a pleasure to address this illustrious group!”

That may be an appreciative line in Miami, but it’s too informal in Munich. Using the director’s first name in front of such distinguished company is unacceptable. Correct protocol mandates that you state the doctor’s title(s) and last name in public, at least until he invites you to switch to his first name, which in some cases may take years. Once you are a trusted, long-term friend, he may move from the more formal form of you—which is Sie in German—to the informal, almost affectionate term du.

For example: Mr. Michiaki Nakano, a partner at the law firm of South Toranomon in Tokyo, is extremely familiar with Western customs, and is conscientious about making his international associates feel comfortable. So even though his Japanese colleagues address him in a very formal manner, generally with the honorific Nakano-sensei, he always invites English- speaking attorneys to call him Mickey. This ensures that his Western associates will not lose face by mispronouncing his name or macerating his title.

Many other cultures with formal naming conventions (e.g., Germans and Nigerians) also conform to Western sensibilities when they work in Australia, Canada, the United Kingdom or the United States.

However, when you are in Rome (or in Tokyo, Seoul or Shanghai), try to behave as the Romans do, particularly when in front of an audience. The last thing you want to see is a video of yourself on YouTube, being too chummy in China—a target for Internet trolls in perpetuity!

There are many more naming conventions: In China surnames come first; in Saudi Arabia binti means “daughter of ” and bin means “son of ”; and in Spain a compound family name will probably list the father’s surname first, then the mother’s. One good source for further information is Merriam-Webster’s Guide to International Business Communications by Toby Atkinson.

4. Avoid sensitive topics and images.
Once you get past the initial greetings and forms of address, there are other behaviors, topics and images you should circumvent. Here are three topics to avoid in your presentation.

Politics and Political Graphics
Your slides should be vetted by a local representative of the country you visit to ensure against the use of insulting topics or images. Some things may seem innocuous to you, like a map for instance, but if disputed territory is portrayed (e.g., the Spratly Islands, claimed by Brunei, China, Malaysia, the Philippines, Taiwan and Vietnam), a lively question-and-answer session may follow. Remember that many websites are banned in China and the Middle East for politically incorrect content.

5. Keep body language in check.
Finally, nonverbal communication can have an enormous impact on a presentation. Sometimes high-energy, animated gestures can be the antithesis of what clients expect. Subtle nonverbal communications are the standard in much of Asia, and minimal gestures transmit tremendous amounts of information.

Therefore, if you take the podium and start gesticulating wildly—punching out your points with your fingers in the air, or whacking your right hand into your left palm—your crowd may pay more attention to your body language than to your words.

Clearly, people around the world are not alike. Different cultures have different customs, priorities and ways of thinking and negotiating. Inquiring about the protocol and business practices in each country will help you avoid delivering an embarrassing faux pas along with your brilliant presentation.

is co-author of nine books, including Kiss, Bow, or Shake Hands: The Bestselling Guide to Doing Business in More Than 60 Countries. She is working on her next book, which will be published by the American Bar Association. Visit her website at TerriMorrison.com.