Benefits of Being Bilingual 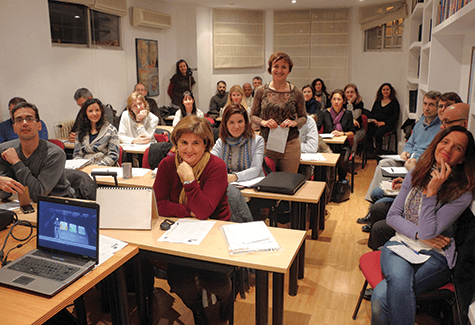 Alejandro Saiz, CC, grew up speaking Spanish, the language of his home country, Spain. Yet in his current job, he finds it important to speak both Spanish and English.

Saiz has found the perfect place to practice communicating effectively in both languages: the Nova Communication Bilingual Toastmasters club in Madrid. The club meets weekly and uses an alternating format, holding its meetings in Spanish one week and in English the next. Chartered in 2010, it clearly fills a need: The club has more than 50 members.

Speaking both languages in the club, says Saiz, “means training in an environment as close as can be to my day-to-day work.”

María José Cid, CC, CL, and a group of individuals she met during a leadership training course chartered the club. A native Spanish speaker, Cid says it was difficult when she started giving speeches in English. “I suffered from a fear of public speaking and doing it in a second language was tougher than doing it in my mother tongue,” she says.

But eventually she became more comfortable and confident. Developing bilingual skills is vital in Spain, says Cid. “Current business and career demands make it a must for Spaniards to speak English.” The club’s format of alternating languages from one week to the next helps members greatly, she adds.

“Every week, our mind frame is set for the language to be used [in that week’s meeting], and all forms, including written evaluations, are in that language,” says Cid. “We consider it language immersion for Spanish speakers when the meeting is in English and the same thing for members of other nationalities when it is in Spanish. The use of both languages naturally improves with time and exposure.”

Saiz says the biggest challenge for him is adapting his speech delivery to the language in which he’s speaking.

“I have noticed that in my case the language has a significant influence over many aspects of the speech,” he says. “For example, I have the tendency to speak too fast in Spanish, but in English I think I control the pacing better. For this reason, when I am preparing a speech and I review the suggestions that I received from previous speeches, sometimes I need to put the suggestions into perspective, taking into account if I had given that speech in Spanish or in English.”

Diverse Membership
Nova Communication members hail from a number of different countries, making the club’s format even more valuable, says Gracia Uceda, CC, CL. “The bilingual format generates an environment of trust that makes it comfortable for all to participate in the meetings,” she says.

Graciela Tena, CC, a Mexican-American currently living in Spain, says she heard about Toastmasters from a friend when Tena lived in the U.S. When her husband’s work as a military diplomat brought her and her family to Spain, she became a member of Nova Communication.

“Since I joined the club, I have enriched my Spanish vocabulary and gained confidence presenting in Spanish,” Tena says.

The club, which meets at a local business school, uses video equipment to help members improve their skills. Tena edits and uploads videos to YouTube from each week’s speeches, noting that the videos help members “learn from their mistakes and embrace their strengths.”

The club’s strong mentoring program also helps members. Those preparing a speech in their second language can meet with a mentor for whom that language is their native tongue, says Saiz, who served as the club’s mentoring coordinator in 2014–2015.

“Delivering speeches in two languages means more room for improvement (as there is always a language you are less comfortable with), and also more room for the mentors to help,” he says. “Some mentees send a preview video of their speeches to the mentors or even meet in person. It is always helpful to have someone review your speech, maybe tell you, ‘That part is clear’ or ‘That one is a bit of a tongue-twister’ and suggest other ways to say it.”

Nova Communication also helped one member, Pablo Ibáñez, CC, CL, with his stuttering problem. He’s now the club president. “My goal was to speak in front of an audience and stutter and not be fearful or ashamed of it,” says Ibáñez, who says support from club members helped him realize this goal as well as become more fluent in both languages.