In today’s accelerated international marketplace, communicating across cultures is more vital than ever. This sold-out series has ended, but you can still hear the great insights from our moderator and panelists. Listen to one or all of our webinar sessions to increase your cultural awareness, discover nuances in humor and body language, and gain cultural business tips. Present your best worldly image and close the culture gap! 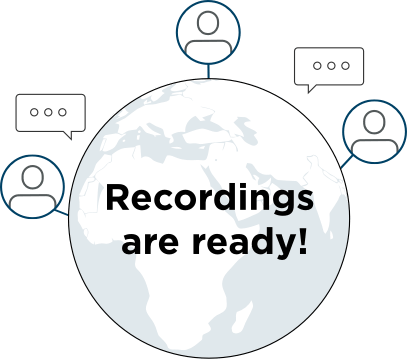 Join one, join them all—On Demand!


Session #1—Know Your Audience
Discover how a person’s cultural background affects how they express humor, gratitude, and professionalism. Get listening and critiquing tips that will help you be a more culturally sensitive and savvy communicator.

Session #2—Humor and Body Language
Have fun discovering cultural differences in humor and non-verbal communication. Learn if it is acceptable to start a speech with a joke when addressing non-American audiences.

Session #3—Cultural Awareness in Business
Find out how culture affects the business environment in subtle and surprising ways. Learn some cultural dos and don'ts, as well as how to develop increased awareness when traveling or working with customers and employees from diverse cultures. Dilip Abayasekara grew up in Sri Lanka and moved to the United States for his higher education. After earning a Ph.D. in Organic and Polymer Chemistry, he worked for 12 years as an industrial scientist, during which time he joined Toastmasters and discovered he had a talent for public speaking and training.

He was twice a finalist in the Toastmasters World Championship of Public Speaking® contest, placing second in 1992. In 2005-2006, Dilip served as Toastmasters’ International President, the organization’s highest leadership role, where he worked with the Board of Directors to serve the organization’s members in more than 100 countries. Along the way, he founded a speech coaching and training business that brought him in front of international audiences. He also served as a college professor of communication and of world religions. Pellegrino Riccardi
Cross-cultural expert and motivational speaker from the U.K.

Pellegrino Riccardi has spent the last 30 years traveling the globe, helping people to connect and interact more effectively with each other. His client list includes some of the largest and well-known brands and organizations in the world.

Pellegrino was born in the United Kingdom in an Italian family and has lived in Norway for the past 24 years. His multicultural background— along with his first-hand cross-cultural work experience—gives him a solid basis from which to provide audiences with tips, practical tools, and thought-provoking insights into what makes people tick.

As a motivational speaker to international audiences, Pellegrino combines storytelling and observational humor to provide of what he calls “edutainment.” Using a unique mix of powerful visual and multimedia effects, Pellegrino takes his audience on an emotional journey.

“I don’t just want my audiences to understand my message; I want them to feel it too,” he says. Sandra Coles-Bell is a long-time member of Toastmasters International, serving in many leadership capacities within the organization, most recently as District Director.

Professionally, she works for a large organization as the Program Director in the Office of Cultural Diversity and Outreach. Sandra plans and executes events for large multi-cultural communities, with a primary focus on the African-American, African, Caribbean, and Filipino communities. Sandra has also served on a Statewide Ad Hoc Task Force. Christian Höferle is a cultural coach, trainer, and mentor for multinational organizations—or rather, for people who work globally. Based in Atlanta, he is German by passport, American by choice, and Bavarian at heart; people call him The Culture Guy.

His passion is to help people discover commonality when they are overwhelmed by difference. His mission is to create peace by facilitating understanding, relating, and connecting. At the core of this purpose is culture. And as he helps people figure out this “thing” called culture, he believes they’ll work at their peak and in peace with others.

With his company, The Culture Mastery, Christian and his team help multinational organizations all over the world achieve their goals in global markets. He is happy to connect with you on Twitter, Facebook or LinkedIn, and invites you to check out his Culture Guy Podcast web radio series. Rashmi Kapse is the founder and CEO of AptCulture, an organization that provides cultural consulting for companies venturing into the Asian market and for Asian organizations making acquisitions in the United States and Canada.

She coaches executives around the globe to lead effectively. She moved to the U.S. in 1998 after receiving her Ph.D. from the University of Mumbai; she has lived and worked in India and Europe. She conducts intercultural coaching for teams that work virtually with international colleagues, as well as conducts performance coaching for teams within the U.S.

Rashmi serves on the Board of Directors at Society for Intercultural Education, Training and Research (SIETAR) in the U.S. She is a mentor for AISEA, an organization that helps early-stage tech-enabled social enterprises in the sectors of healthcare, education, and agriculture. A native of Afghanistan, Lyla has lived in the United States, Japan, and Italy. She is currently the Master Trainer and Director of Government Programs at the Cultural Intelligence Center in Michigan.

She previously served six years as an active duty U.S. Naval officer. At the U.S. Defense Intelligence Agency, she trained U.S. and North Atlantic Treaty Organization (NATO) military, law enforcement, and civilian personnel prior to their South Asia deployments. Additionally, she has served as cultural advisor to numerous national security and foreign policy leaders. She served a year-long deployment as the Cultural Advisor to the Commanding General of the NATO Special Operations Command, headquartered in Kabul, Afghanistan. Dylia Sheehan is an Intercultural Program Consultant with 30 years’ experience and expertise in Latin American Culture. Fluent in Spanish and Portuguese, she is: a dual citizen of the United States and Uruguay. She provides cross-cultural and language training to major companies like British Petroleum, General Electric, PepsiCo, and Caterpillar.

She most recently worked for Cartus Corporation in Danbury, Connecticut, providing customer service and cross-cultural training services for corporate clients in Brazil and South America. Kristen Hamling has worked as a psychologist for more than 15 years. She lives with her family in a small town on the North Island of New Zealand.

Her experience includes serving for 10 years as a psychologist in the Australian Army Reserve. Kristen completed her doctorate in psychology, focusing on the well-being of first responders (police, fire, and paramedics).

Kristen now contracts with a variety of organizations on matters related to trauma and well-being. She helped support a trauma response following the events of the Christchurch Mosque attack and the Greg Mortimer ship during the COVID-19 lockdown. Kristen also operates a small, private practice in New Zealand.

Kristen moved to New Zealand from Sydney, Australia, seven years ago. Since then, she has come to understand and value Aotearoa culture, which informs the way she practices as a psychologist.

Listen to tips and insights from global business leaders.

Hear perspectives from an online panel of Toastmasters experts.