Are you a self-aware, vulnerable leader? Two 2019 International Convention speakers share ways to get there and why it’s an asset. 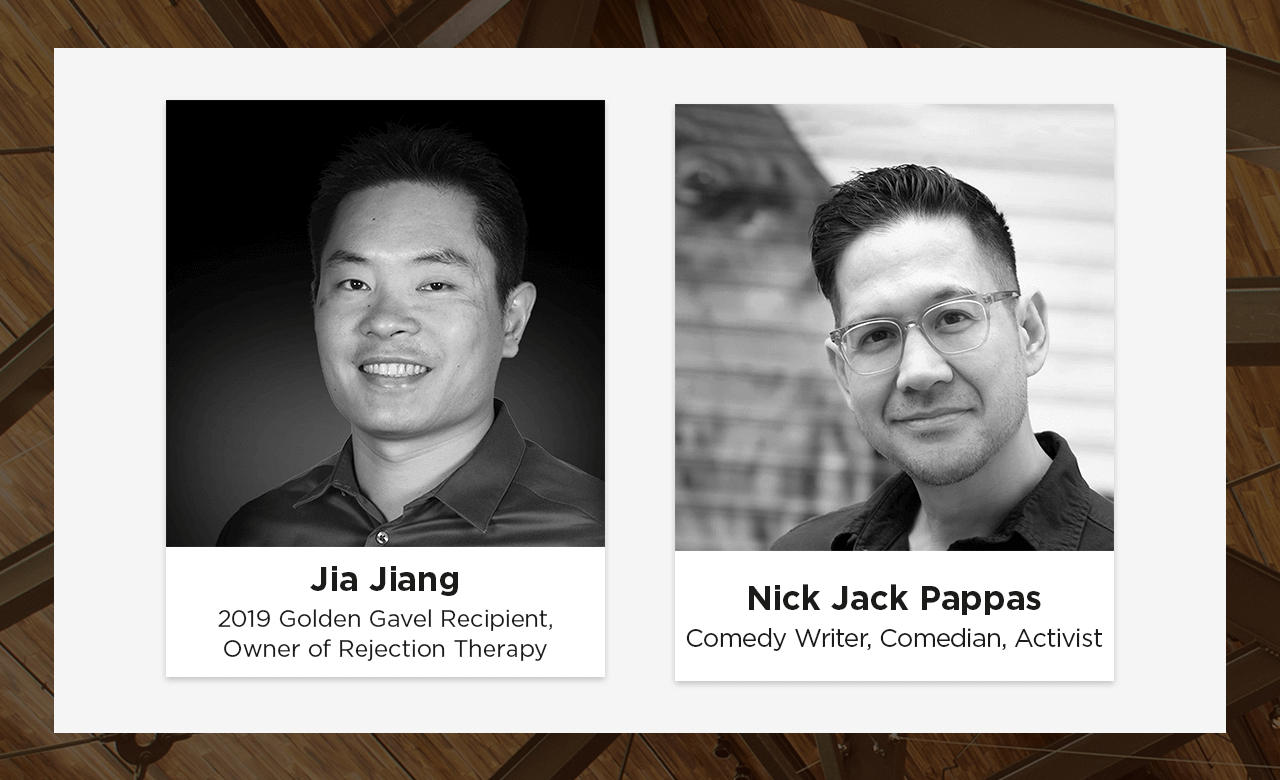 As a leader, have you ever said, “I don’t know,” or “I was wrong”? Instead, do you wear a public coat of armor, in order to avoid being vulnerable, being human? Contrary to conventional wisdom, vulnerability is not a weakness. Rather, it is more currently regarded as the surprising secret to authentic and powerful leadership.

How do you become a more vulnerable leader, who is also respected? Being open in this kind of way can be practiced through humor and “rejection therapy” skills, according to Nick Jack Pappas and Jia Jiang, two presenters at the 2019 International Convention in Denver later this month.

Jiang, who will be honored with the Golden Gavel award, is a proponent of becoming fearless by looking at rejection with open-minded curiosity; this can be a precursor to being more vulnerable and hence, more successful, as a leader. The mindset of invincibility-through-adversity can also lead to break-through successes, he says, whereby leaders can “think bigger and achieve higher.”

How do you practice rejection therapy? Modeling Jiang’s example, the idea is to get used to the idea of becoming, in essence, regularly rejected by making unusual, often absurd, requests of people (outside of the place where you lead), such as asking to borrow 100 from a stranger or asking a bakery to create a custom item on the spot. One of Jiang’s great lessons through this practice was that calm conversation could often transform rejection into opportunity. Leaders can bring these skills and the openness to meaningful risk with them to the leadership environment. Leaders who aren’t afraid of rejection, and hence, their own vulnerability, are often seen as more authentic and are able to build greater bonds and increase connections.

Pappas reveals another route to leadership vulnerability—humor. Laughter, he says, is magical, able to instantly relax those around you, while also raising your approval level. It also opens an environment of positivity and connection.

How do you spark humor that leaves you vulnerable? This is a skill Pappas refers to as “the highest level of humor: revealing things about yourself in a funny way.”

It requires you speak from the heart, often through shared experiences, such as embarrassing things your children have done, a crazy commute to work, and even serious, seemingly taboo subjects, such as cancer and aging parents. One subject you shouldn’t poke fun at—your area of expertise.

The idea behind a vulnerable leader is that “we’re all in this together,” according to Pappas. Give yourself to the people around you and they’ll give back to you.

Who are you as a leader?

How Do You Define a Great Leader?

Lead with Some Laughs