Why is the Competent Leadership manual important? Why should we use it? 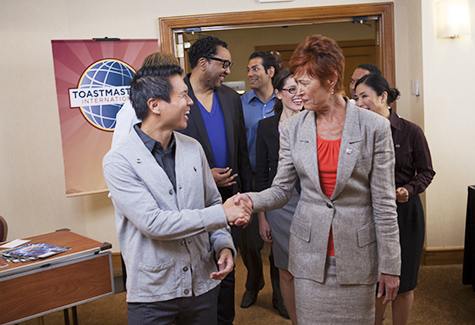 "Since starting to use the manual as intended, I have found that not only am I doing a better job in each role, my speeches are better."

In January 2006, a new member joined my club. Of course, this meant he received two manuals: Competent Communication and Competent Leadership. The new member came to me, the president, and asked how to use the Competent Leadership manual. As the advanced, experienced Toastmaster I am, I gave him the highly articulate answer of "Huh? Duh, ah, well, gee, I don't know. But I hear it's only 10 projects."

Wanting to be a good leader, I immediately ordered the manual and studied the projects. When I saw that each project consists of doing multiple roles, I panicked. How is anyone supposed to complete this? However, I began bringing the manual to each meeting and asking for an evaluator to fill in my required assignments. It was a slow process, but the roles started to gather checkmarks.

One day I read the entire Competent Leadership manual! My first reaction was "Boy, Sam needs to read this! I wish Mary would learn that!" I caught myself thinking, "Wow, I didn't know you should do that role that way! I'll start paying more attention to how I perform meeting roles." Yes, this experienced Toastmaster, already a Competent Leader (old style), learned a whole lot of new information. I've performed club meeting roles for years, but I learned many things and many new ways of looking at each role.

As I read the manual, I discovered that it's not just about leadership. It's also about how to be a good Toastmaster – a competent member of Toastmasters International. There are a couple of places where you have to specifically lead a project, but most of the manual is about how to perform the standard meeting roles.

Most roles in a Toastmasters meeting are listed in at least one project. Most are listed in multiple projects. You may look at each project as a whole and study how the topic applies to the roles listed in the evaluation section. For example, Topic One is "Listening and Leadership." Study the information in the chapter, and then see how the skills apply to the four roles listed by looking at the questions asked in the evaluations. The roles are speech evaluator, grammarian, Ah-Counter and Table Topics speaker.

Another way to use the manual is to pick a role, (evaluator,) and study each chapter/project with that role in mind. The evaluator role applies to Chapter One – “Listening and Leadership,” Chapter Two – “Critical Thinking,” Chapter Three – "Giving Feedback" and Chapter Eight – "Motivating People." There are a few other roles outside of a meeting that may be performed to complete the manual, but the majority of the projects are performed within the meeting itself. These are roles we will all perform at one time or another during our meetings, so why not learn all we can about the roles? Quite frankly, I never thought about how listening is an important skill for a Table Topics speaker.

Since starting to use the manual as intended, I have found that not only am I doing a better job in each role, my speeches are better! Not only have I learned how to perform a role in the club more efficiently and effectively, I have now learned what others are looking for in a speech. My speeches have improved as well as my other skills in the various meeting roles.

Jean Hogle, DTM, is a member of GE Salem Club 2675 in Salem, Virginia. Contact her at HogleJG@aol.com.