Strong leaders build on trust and a shared sense of purpose. 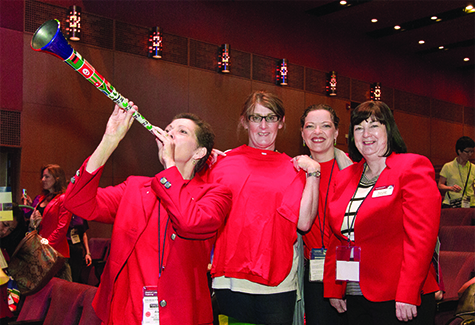 Anyone who has participated in multiple Toastmasters clubs knows that some groups rise above others. The mix of good leadership, team cooperation and constructive feedback in superior clubs makes the experience particularly valuable or memorable. On the other hand, we’ve all been in clubs—or business or academic work teams—where there isn’t that same sense of purpose, group cohesion or feeling of accomplishment.

What sets the best teams apart? It’s more than happenstance or good fortune that creates high-performing work groups. Applying a set of research-based principles can help, say experts, and you can follow those principles to help your Toastmasters club achieve its highest potential.

Work Groups That Shine
Geoffrey Bellman and Kathleen Ryan, co-authors of the influential book Extraordinary Groups: How Ordinary Teams Achieve Amazing Results, say an “extraordinary” team can be defined this way: “An extraordinary team creates opportunities for personal transformation while delivering outstanding results.” Examples of personal transformation might include an increased sense of personal confidence, building new skills or knowledge, and developing new or deepening relationships and shifts in perspective about one’s self, others, the team or an organization.

Leaders of high-performing teams share certain traits, says James Kouzes, co-author of the best-selling book The Leadership Challenge: How to Make Extraordinary Things Happen in Organizations. These leaders understand they can’t lead on their own, and work hard to model behaviors they ask of their team members.

“Of all the lessons I’ve learned studying leadership over 30 years,” says Kouzes, “one that continues to ring true is that no one can do it alone, and leaders have to create a climate of ‘We’re all in this together.’ In other words, just because there is a hole at your end of the boat doesn’t mean my end isn’t sinking too.”

Top work groups, like the best Toastmasters clubs, create a sense of shared leadership, where team members slip in and out of leadership roles based on their expertise and team needs—and where a leader-by-title sets aside his or her ego to allow it to happen.

“If you were a fly on the wall observing the workings of a high performance team, one of the things that would strike you is how difficult it is to determine who the team leader is,” says Howard Guttman, a management consultant who builds high-performance teams and is author of the book Great Business Teams: Cracking the Code for Standout Performance. “Everyone has a fairly powerful share of voice on such teams.”

These same principles hold true for virtual teams, an increasingly prevalent structure where team members don’t work under the same roof but regularly communicate and collaborate via technology like email, texting and videoconferencing. According to a study by market intelligence firm International Data Corporation, 1.3 billion people around the world—or 37 percent of the global workforce—will work remotely by 2015 using mobile technology.

But while the rise of virtual work teams has created many advantages, it also means new challenges for team members and those who lead them. The biggest issue for virtual team leaders remains learning to trust those they can’t see performing their work, says Kevin Sheridan, a human resources consultant and author of the books The Virtual Manager and Building a Magnetic Culture. He himself was an archetypal “old school” manager who believed people should work from 9 to 5 in an office before he became convinced of the power of virtual work by his millennial-generation employees.

“If you are getting the performance outcomes you want from a team, where and how people work becomes irrelevant,” says Sheridan.

Russ Martinelli, senior program manager at Intel Corporation and co-author of the book Leading Global Project Teams, says virtual teams lack much of the informal communication that traditional teams get in the hallways or through impromptu meetings. “Leaders have to help make up for that,” he says. “You almost have to force more formal communication in terms of meetings or forums where you focus on technical aspects of work, change aspects of projects, generate ideas or report on progress.”

Management consultant Guttman says it’s important for all teams to step aside from their agendas on occasion to evaluate how they’re functioning as a group. “You have to periodically call a timeout and assess how the game is working,” he says, and ask, “How are we doing regarding accountabilities, relative protocols and a willingness to be honest with each other?”

Peers holding peers accountable is a counterintuitive concept for many, Guttman says, given that we’re conditioned to the idea of designated leaders functioning in the “parental” role. But he says it’s also a key attribute of teams working at peak levels.

Problems arise when team members miss critical deadlines, don’t pull their own weight or have other performance or behavioral issues. Good leaders don’t avoid uncomfortable discussions about these types of problems, Stanislaw says, since they know the behaviors will only resurface down the road. While most of these issues should be addressed privately, good leaders also address them publicly when warranted.

For example, if someone has a history of being late to meetings, Stanislaw says it’s not inappropriate for a leader to address the issue in front of the team. “A leader’s responsibility,” he says, “is to always keep his or her eye on what kind of culture they want their work group or company to have. You don’t want others to think it’s OK to regularly show up late.”

Stanislaw says a skilled leader might address the chronically late employee and say, politely and quietly, “I’m sorry you’re late today.” The goal is to avoid anger as well as humiliation, but also to send a message to the team. “The team leader,” he says, “can then meet privately with the individual afterward, and say, ‘I notice this has been happening from time to time; is there anything I can do to help you be on time in the future?’”

Cinnie Noble, founder of CINERGY Coaching, a conflict management-coaching company in Toronto, Ontario, says conflict often emerges on teams because people have differing views of their work roles and responsibilities, and that’s usually because those factors haven’t been clarified by a team leader or they’ve been misinterpreted by team members.

Noble also believes conflict management isn’t a skill that’s emphasized or developed in most companies. “Companies talk instead about having good communication skills,” Noble says, “but they don’t specify what effective conflict management looks like in practice, and often don’t offer specific training in how to manage conflict well.”

Leadership expert Kouzes says leaders must create a team culture where there is reciprocal behavior: “Sometimes I give and you take, and other times you give and I take.”

Martinelli says leaders, whether in Toastmasters clubs or companies, can’t lose sight of the fact that they’re constantly under a spotlight, and that trust is a fragile concept. “You have to create a culture where feedback is encouraged, and follow up on your commitments, because your team is always watching,” he says. “You also have to be concerned about the well-being of your team as human beings, because people will sense that. I’ve seen over and over again where a team leader will break the trust bonds within a team, which starts it down a dysfunctional path.”

Whether it’s your Toastmasters club or a work team, the research-backed principles of creating a compelling purpose, sharing leadership and embracing individual differences go a long way toward creating the kind of exceptional team all members are proud to call their own.

Tips for Team Leaders
One of the best things about Toastmasters is that you not only learn how to give speeches, but also how to improve your interpersonal communication. That includes dealing effectively with conflict, one of the most valuable—and difficult—skills to master.

It’s inevitable that interpersonal conflicts will arise when Toastmasters work together on teams—planning various events, for example—or interact in club meetings. When problems emerge, we often avoid dealing with them head-on, because it can be uncomfortable. But it’s crucial to speak up in such situations, says Region 3 Advisor Linda Williams, DTM.

“Conflict is either going to be buried or you’re going to find a way to make it productive and use it positively,” she says.

Williams, a member of three clubs in Texas, helped facilitate a session about conflict resolution that was presented by World Headquarters’ Education and Training department. It was part of District Leader Training this past August in Kuala Lumpur, Malaysia. Although the session was for district leaders, its principles are applicable to all Toastmasters leaders.

To establish healthy conflict, said session presenters, create ground rules for dealing with difficult situations. Explore with your team the parameters for acceptable and unacceptable behavior—for example, consider what type of language should be used.

It’s important that everyone in the group feel they can express their opinions without fear of being criticized or insulted. What helps, says Williams, is to limit discussions to the issues themselves, rather than talking about the personalities involved, which heightens the potential for hurt feelings. It’s also important that leaders remain open to everyone’s input, she adds.

If, in the midst of a candid group discussion, someone feels uncomfortable or overwhelmed, they can ask the team to stop and come back to the problem later, Williams says. “People need to feel there’s a safety valve. If somebody feels pressured, they can say, ‘Hey, this is getting too intense, I need a break here.’"

*Develop your team into an extraordinary leadership team by starting a Toastmasters club today.